ART of Cape Romano – The curious inhabitants of Australopithecine Island

NIGHT FUNSCAPE PHOTOGRAPHY and DIGITAL ART from Cape Romano in the Ten Thousand Islands of the Everglades! 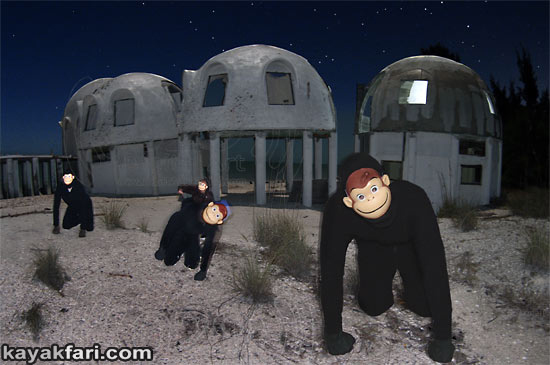 On a remote island in the Ten Thousand Islands area of the Everglades an isolated tribe of curious Australopithecines took up residence in the Cape Romano dome ruins. For years the clan lived in harmony subsisting on a diet of mostly fish, marine life and herbs. They also scavenged the shoreline always looking for more food bits. Sometimes they would find ready made food containers with half eaten sandwiches and salads, presumably left behind by the “hairless ones” (who we call tourists). These were “feast” days to them, and the living was good! 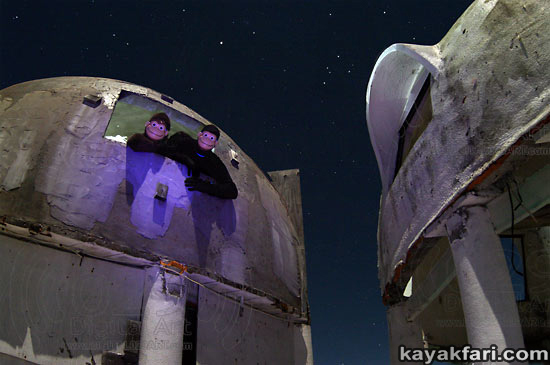 The first Australopithecine I ever met, I named him “George” due to his curious nature! There was also at least one female of breeding age and I called her “Lucy”, along with a young juvenile male “Diego”. Where in the world did he come from? 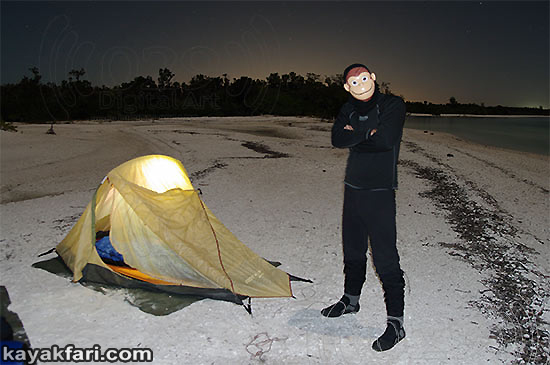 The hominins soon learned that the “hairless ones” would come twice a day, morning and afternoon, almost like the movement of tides. They would watch from their hiding places and later find other objects the “hairless” sometimes left behind. They made good use of all the things left to them like tents, tarps and plastic cups and wood pieces! 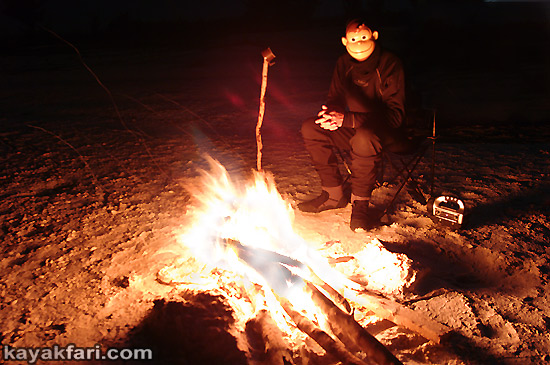 In time, George learned the ways of taming “the fire” on his own. He closely observed the “hairless” visitors who would often tend flames and then sleep in blankets on the island. This magic power over fire made George the undisputed leader of the clan! 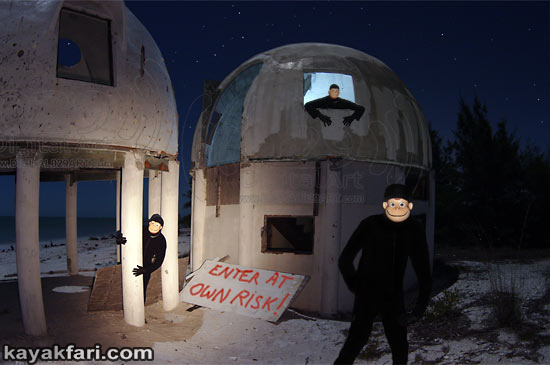 Sometimes, in order not to disturb them, I would use a night vision scope. Regardless, they’d soon spot me! So I began to dress like them to better “fit in”, and soon they began to accept me as one of their own. We were able to communicate using only simple hand gestures! 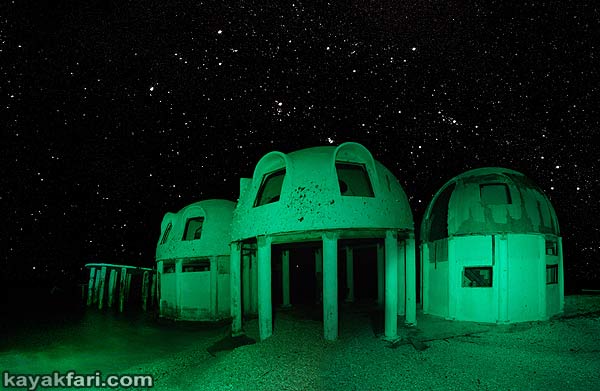 I wondered about what their Hominin minds fathomed while looking up at the stars. Did they think about yesterday or tomorrow? Did they dream about the stars? In any case, they seemed quite content! 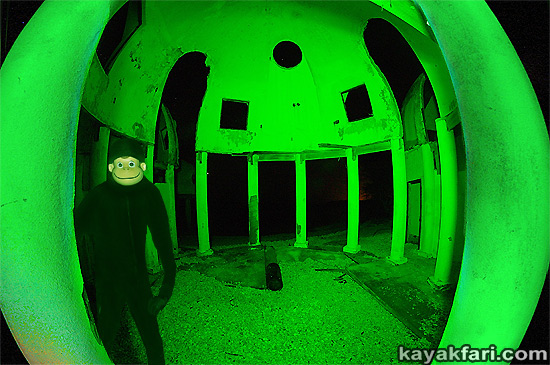 One late summer, just before the “big wind”, I discovered clear evidence of breeding within the clan! Sitting there, in her den inside one of the domes was a new born Australopithecine baby girl. With great joy I called her “Hope”. 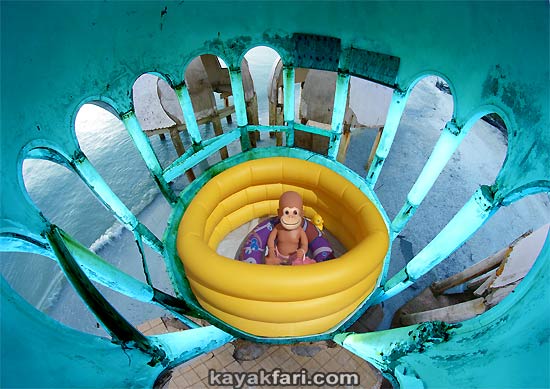 For a while life on Cape Romano for the Australopithecines carried on almost as if time stood still. George went out hunting and foraging, while Lucy took care of the young Hope. Diego was rambunctious and full of life! As time went on, George’s curiosity never stopped amazing me, and his ability to absorb knowledge truly impressed me! 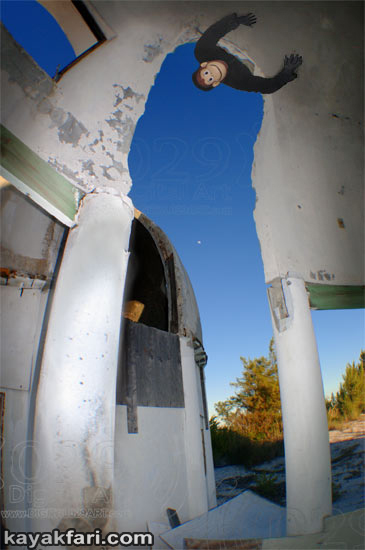 After mastering the use of fire on his own, I felt that George could possibly learn to master the use of water and taught him how to paddle a boat. In short time he moved on to the Greenland stick and visited neighboring islands. I felt his enthusiasm so strongly, that I began to suspect his intentions. It then became clear that he was merely pursuing his inherent natural drive to seek out additional mating opportunities on the other keys. I didn’t have the heart to, and in any case could not communicate to him, that his was in fact the only Australopithecine tribe around. However, I did consider entering him in the WaterTribe challenge. It was just then that disaster struck! 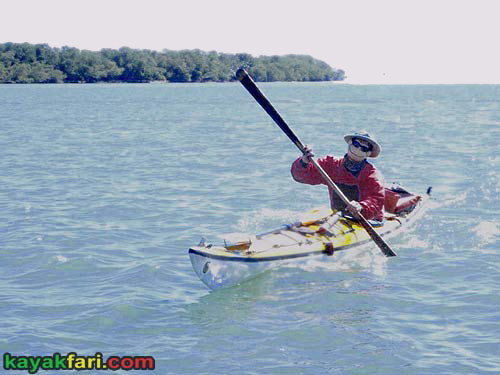 Sadly they say all things must come to an end..

Rising sea levels, powerful storms and beach erosion all conspired to flood the Cape Romano shacks. The area is now permanently underwater, and the whereabouts of George and his secretive Australopithecine clan is unkown. Maybe they were able to float or paddle away on some debris? Maybe George figured out how to make a boat? Who knows?

Perhaps one day I will find them again on an undiscovered island in Florida Bay, or maybe on some remote hammock in Big Cypress! 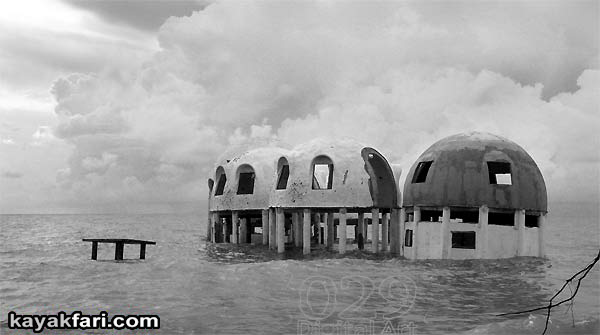 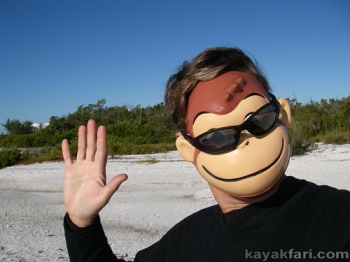 You may also like – SURREAL DIGITAL ART – inspired by the Cape Romano domes from www.decoratedreality.com

Available as high quality archival prints for sale directly to you in various sizes for all your collecting, decorating and viewing pleasures and needs!

© 2014 – 2018 Flex Maslan / kayakfari.com / digital029art.com. All original photographs, artworks and music in this portfolio are copyrighted and owned by the artist, Flex Maslan, unless otherwise noted. Any reproduction, modification, publication, transmission, transfer, or exploitation of any of the content, for personal or commercial use, whether in whole or in part, without written permission from the artist is strictly prohibited.

This is a work of fiction. All characters appearing in this work are fictitious. Any resemblance to real persons or Australopithecines, living or dead, is purely coincidental. No Australopithecine, nor person, nor kayak was harmed in the making of this work. The author is sorely responsible for the contents of this work.

With that said.. Blessings friends!