Paddling the Goodland to Cape Romano loop and camping in the aftermath of Hurricane Irma.

Goodland to Cape Romano is at least a 14 mile loop, much of it in open water on Gullivan Bay in the Ten Thousand Islands.
This is a short and relatively easy paddle for intermediate paddlers with several route options depending on weather conditions! 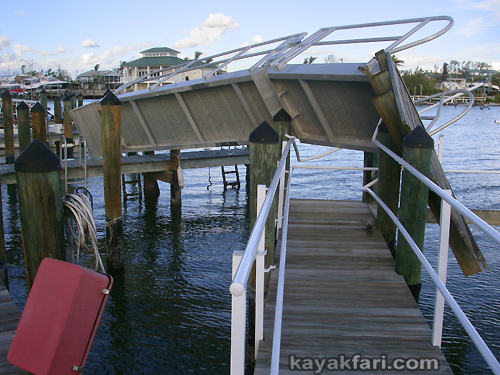 The impacts of Hurricane Irma can be seen at hard hit Goodland three months after the eye of the storm passed nearly overhead.
Goodland Boating Park docks and ramp.

The eye of Hurricane Irma made landfall directly at Cape Romano at about 3pm EST on Sunday 9/10/2017 as a Category 3 storm. 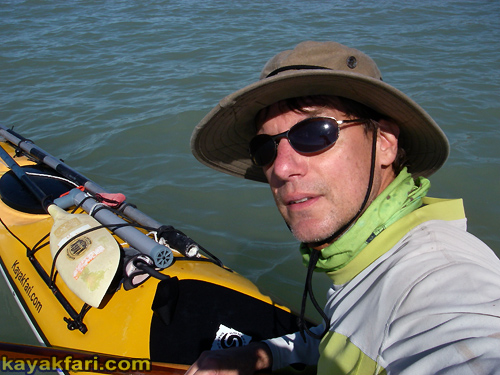 Heading out on an overnight trip to check out Cape Romano three months after Hurricane Irma passed overhead. 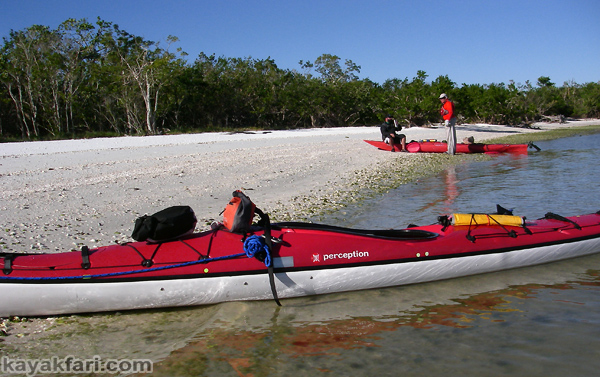 Frank pulling up onto the beach at the tip of Cape Romano.

Camp Kayakfari is established at 40 minutes to 5 in the afternoon on Cape Romano! 🙂 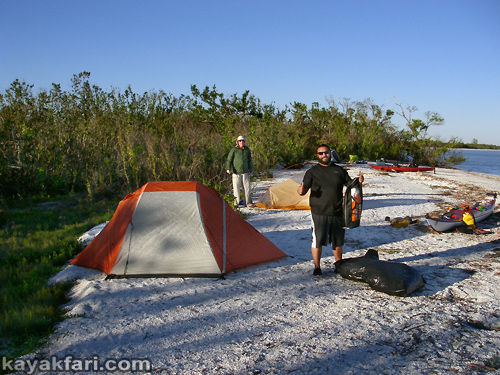 Building up a camp on the beach.

Nick and Frank bundled up and facebooking the sunset experience at the cape.

Bare mangrove roots bathed in golden sunshine along the shoreline of Cape Romano! 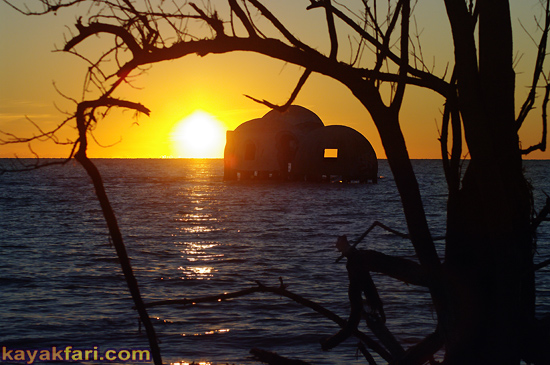 Sunset over the dome home ruins at Cape Romano in December 2017.

Warming up by the campfire at Cape Romano under the stars.
The glow on the horizon is the collective light pollution from the east coast of South Florida over 90 miles away! 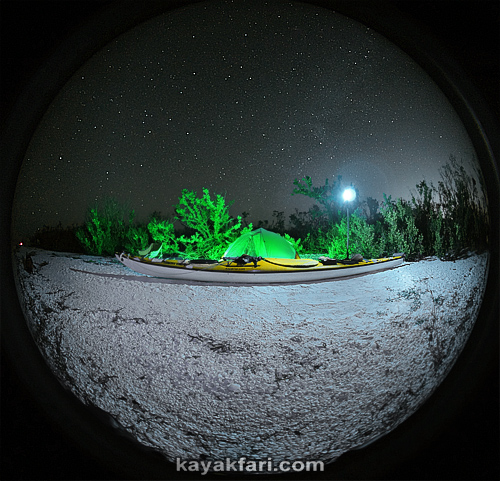 After Frank and Nick went to sleep, I set out to do some fun night photography.
You can still see the glow of the fire over at extreme left! 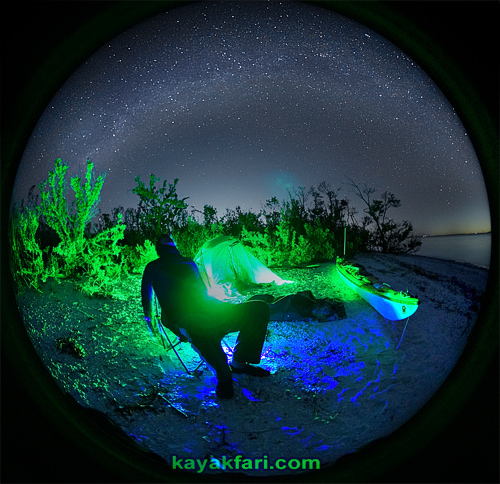 Hanging out under the Milky way and stars at Cape Romano! 🙂
I traded the warmth of the fire for the cool green glow of custom Christmas kayaking led ribbons surrounding my tent. 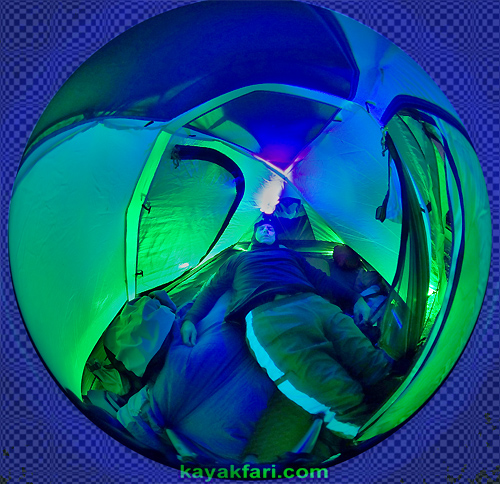 “My Mind is Glowing” inside the tent.
Temperatures later dipped into the 40’s on this night – cold for South Florida!

Reminiscing of the time when the domes were still on dry land ..
ART of Cape Romano – The curious inhabitants of Australopithecine Island.

.. and that one time on Cape Romano when the sky exploded! 😉
“Coronal Mass Ejection Afterglow”
ART of Darkness – Kayaking the final frontier of imaging and photography.

ART of Darkness – Camping with the Stars! Part II 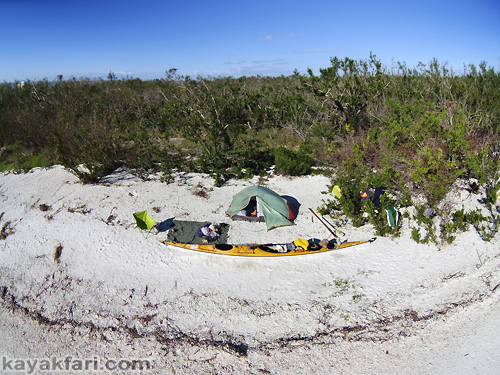 Aerial view of camp Kayakfari in the morning on the beach at Cape Romano. 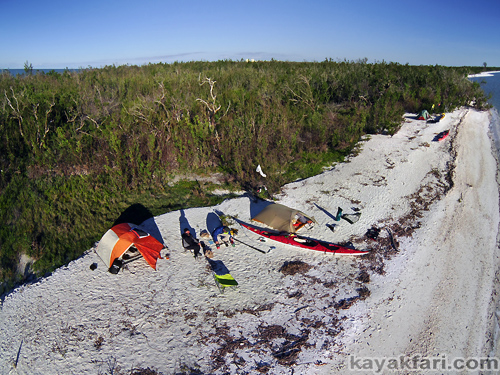 How the other half camps further down the beach! 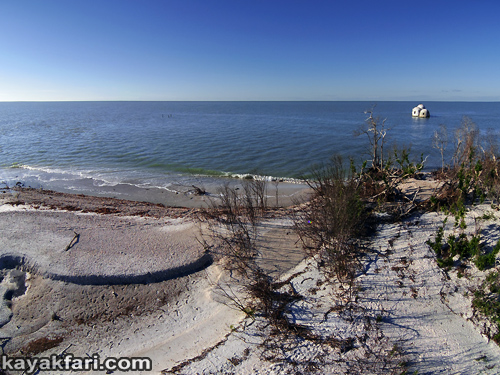 Aerial view of the dome ruins and the little bit of shoreline at Cape Romano. 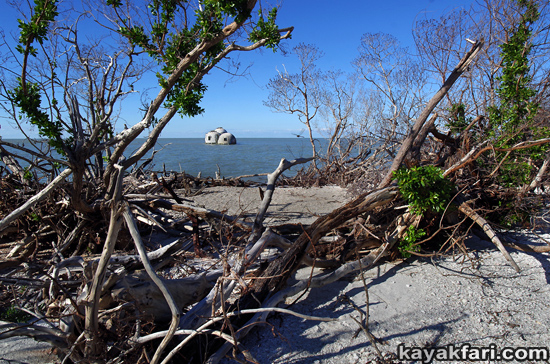 Twisted mangrove roots frame the old dome shacks. It’s a miracle they are still there!

Incredibly, four of the domes still remain after the eye of Irma passed directly overhead with 120 mph winds! 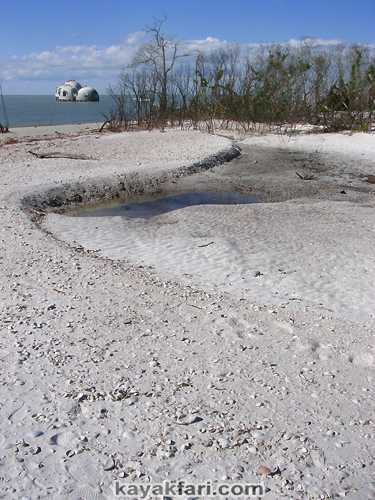 Most of the shoreline is now below high tide and subject to flooding!

Like much of the Ten Thousand Islands, Cape Romano features that fine sugary sand! 🙂 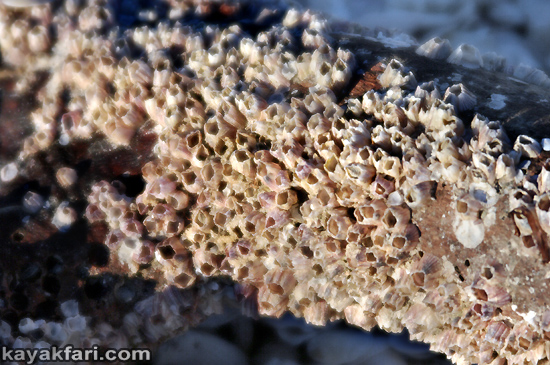 Millions of shells of all types and sizes can be found on Cape Romano. 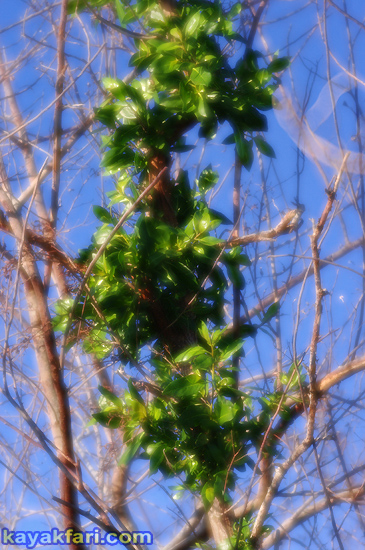 Fresh growth leaves are bringing some of the vegetation back to life!

There is no shortage of firewood, but be sure to make your fire pit below the high tide line!

The shoreline is severely eroded and most of the vegetation is dead.

Frank and Nick setting up their kayaks for departure.

The tip of Cape Romano is notorious for strong rip currents.
It may be wiser to portage and launch on the opposite side if conditions warrant it!

Paddling around the domes – there’s a good current here too! 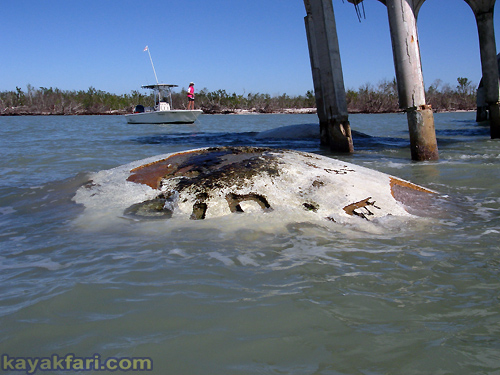 Two of the domes’ columns collapsed during Hurricane Irma leaving just the cupolas above the water.

Leaving the post-Irma dome home ruins behind, paddling due north on the Gulf side. 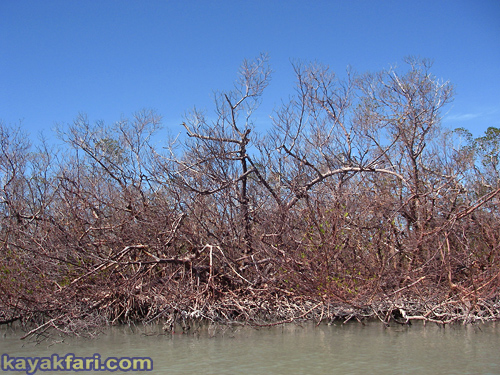 Interestingly, the western side of the island bore the brunt of Irma.
There are miles of leafless red mangroves! 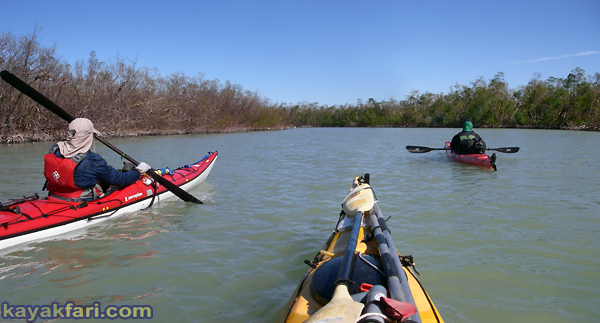 Heading due north up the Morgan River on the return trip.
Note the difference in leaf cover – left bank vs right bank (leading edge vs trailing edge)!

Aerial view of lunch break on a sandy spit where the Morgan River and Blind Pass meet Gullivan Bay.

The Banana Boat with poles in the Ten Thousand Islands.
A Kayak Aerial Photography Method – a behind (and above) the scenes look!

Paddling back up Coon Key Pass into Goodland with clouds rolling in and wind picking up!

Back at the ramp at Goodland Boating Park, one of several possible launch spots in town.

Banana Boat all loaded up for the 21st century! 😉

Final stop in Goodland for a delicious dinner at Little Bar, which is another put-in possibility – inquire within! 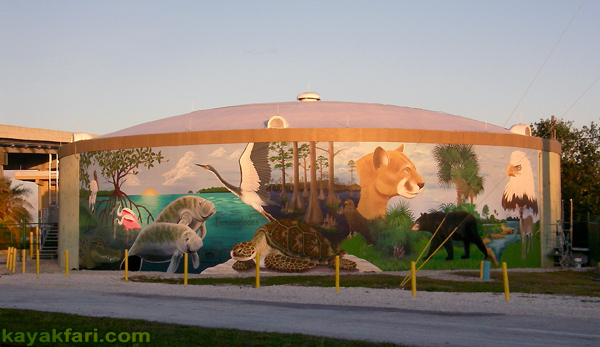 Parting shot!
Beautiful freshly restored mural by Bonnie Hauke on the Goodland Water Tank at the entrance to the town.

After Hurricane Irma, the tip of Cape Romano is much smaller than it used to be. There is very little dry beach left above high tide so be prepared to camp further up on either side.

There is plenty of firewood due to all the dead and drying vegetation. Be sure to make your fire pit below the high tide line!!

The remaining dome ruins are unstable and could collapse at any time, so don’t put yourself at risk by paddling inside them!

Strong rip currents around the tip of Cape Romano are common and treacherous! You may find it easier and safer to portage and launch from the other side depending on your trip.

Time your trip to work with the tides and weather and paddle within your limits! You can hug the shoreline the whole way if you don’t like open water paddling, but it will make for a longer paddle.

© 2018 Flex Maslan / kayakfari.com / awakenthegrass.com. All original photographs, artworks and music in this portfolio are copyrighted and owned by the artist, Flex Maslan, unless otherwise noted. Any reproduction, modification, publication, transmission, transfer, or exploitation of any of the content, for personal or commercial use, whether in whole or in part, without written permission from the artist is strictly prohibited.