Pahayokee Overlook to Main Street – Probing into the middle of Shark River Slough.

Pahayokee (Pa-hay-Okee)  is a Seminole Native American word meaning “Grassy Water”, and is how they referred to what we call the River of Grass – the Everglades. Today Pahayokee refers to a boardwalk and scenic overlook over the Everglades grass prairies and the Shark River Slough. The Pahayokee Overlook is itself part of a large Hammock, just off the main Park road in Everglades National Park.

For Glades paddlers, Pahayokee presents interesting possibilities due to it’s close proximity to “Main Street” on the Shark River Slough. The so called Main Street is an airboat trail that runs straight down the middle of the slough and connects directly into Bottle Creek and Rookery Branch, which in turn lead to the Canepatch back country campsite. Thus in theory, it should be possible to paddle from Pahayokee to Canepatch in one day. Also, if such a connection could be made, it could mean an alternate  trip exit for those doing a trip down the Shark River Slough.

Main Street in white and our route in yellow in relation to Pahayokee inside Everglades National Park.

Intersect of our route in blue and Main Street on the slough. Actual traveled route in yellow. 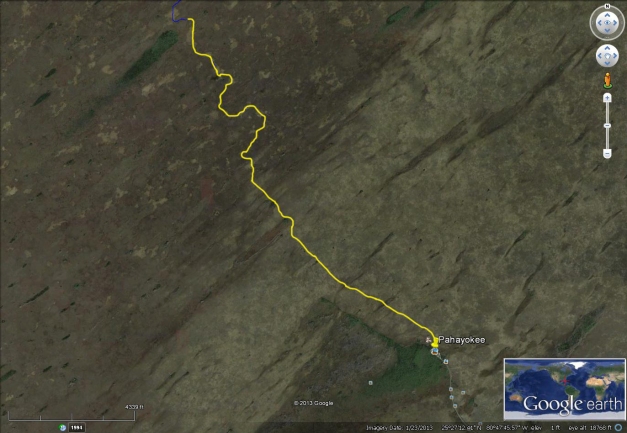 Our approximate route from Pahayokee to a large hammock about half way to Main Street on the Shark River slough.

Somewhere between hiking and paddling!

This was the premise for a day paddle organized by Terry Helmers of the Everglades Exploration Network. There have been successful brute-force attempts to connect these points in the past, but from what Terry says “it was just ugly”. There have also been aborted attempts along a southerly route towards the slough. Terry’s approach was to map out a more northerly route to connect with Main Street (read detailed discussion).

Early morning launch from the Pahayokee overlook in the Everglades.

The start was a bit rough .. very low water for paddling.

Straight out the gate, so to speak, water was low and we had to slough slog long sections. We kind of expected this, and hoped that the water would gradually deepen as we approached closer and closer to the Shark River slough.

Dragging boats, slogging through the sawgrass prairies of the Everglades.
CLICK for superwide panorama!

Terry says .. are we having fun yet?

Water depth ranged from near zero to close to 2 feet. The sawgrass prairies have many holes or deeper pockets. Many of these are connected via “Gator crawls”, barely perceptible trails in the grass made by Alligators as they move from place to place in the Everglades. This is their kingdom after all!

Map/GPS check near a small hammock on the fringes of the Shark River slough. 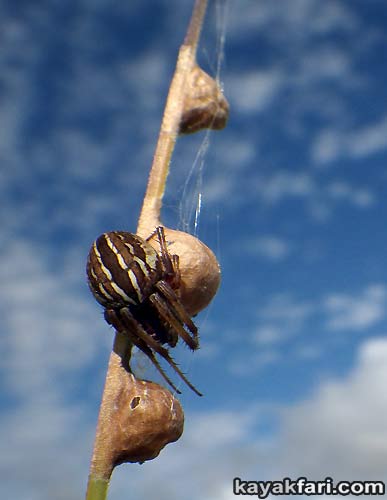 A spider on Spike Rush blade in the Everglades. 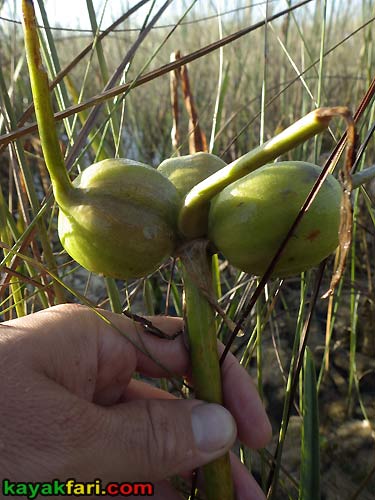 Near a small hammock, in a deeper pocket we came upon a

The soft shell turtle in about two feet of water.

This turtle was remarkably relaxed and did not seem

to mind my presence! 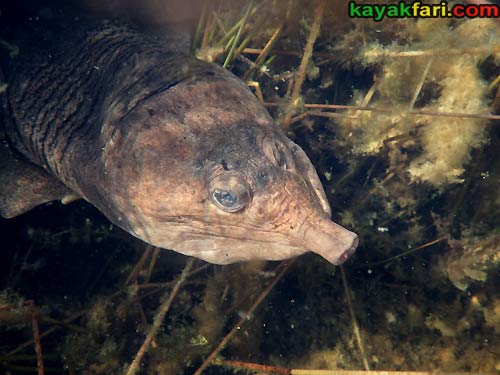 Florida Soft shell turtle has nostrils on the tip of the snout.

The sawgrass here grows only 2 to 3 feet, so it’s not too bad. I had half-finger sailing gloves and got a few small cuts on the tips of my fingers. At this size they only feel like paper cuts, but sawgrass is razor sharp!

Passing by a Teepee-like grass formation.

Barely floating in about 6 inches of water on a sawgrass prairie.

I have to say that the combination of a narrow hull plastic sea kayak (16ft x 22″) and a (very) stout Greenland storm paddle (short stick) worked great. The kayak easily sliced through the vegetation, and the short stick functioned well mostly as a push pole. Thanks to this I slogged the least among the group! For the shorter stretches of actual paddling, I just used a sliding stroke. I brought along a normal size Greenland stick but the water never got deep enough to use it. C’est la vie!

At the edge of the slough there’s a mix of spikerush and sawgrass to paddle through.
CLICK for superwide panorama!

Paddling through the deeper Spikerush fields.

Hand to hand combat in the sawgrass!

an excellent choice in this terrain! 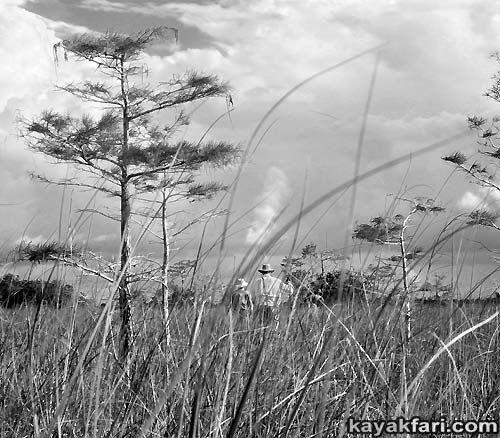 Dwarf cypress in the slough. 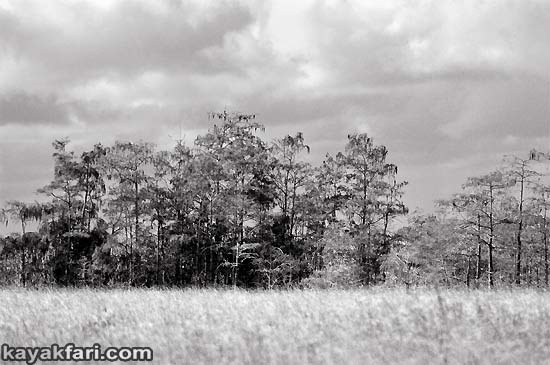 A distant line of sawgrass and cypress trees. 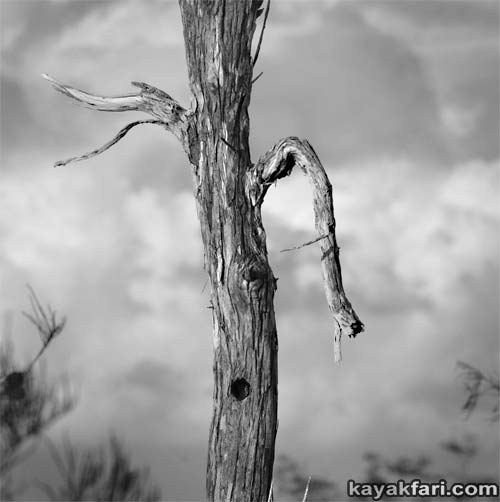 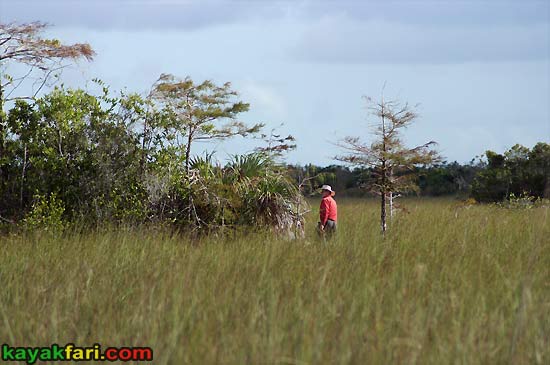 What’s this a Swamp Foot sighting in the bush??
Note the forward-leaning gait and long arm swing – see for yourself! 😉

Approaching closer to Shark River slough the water got deeper

and we were able to paddle again. 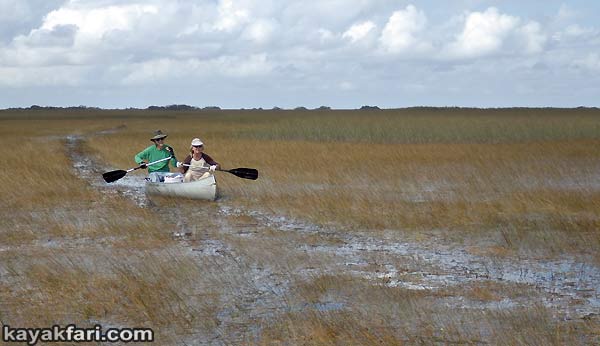 Paddling on the Shark River slough in the Everglades.

Empty Apple Snail shell floats on a bed of periphyton.

periphyton mats all around,

a good sign of clean water in the River of Grass!

While periphyton  doesn’t look pretty, it doesn’t really have any scent to speak of and isn’t slimy either. It just falls apart between your fingers. Paddling through it in a kayak inevitably results in chunks of it being deposited on deck, which can be irritating at times. It’s easy to clean up when wet, but once it dries it tends to stick well!

The aerial view from the top on the Shark River slough.

Being out on the Everglades prairies or sloughs I get a feeling of freshness. The air is pure and breezes smell really good! There’s nothing but endless grass and a few island hammocks on the horizon. Up above is a great big sky. It’s a neat place! 🙂

Standing up in the 22 inch wide sea kayak was easy as long as there was some vegetation around the boat and I could use the Greenland stick for support.

Standing in my sea kayak, starring at that big Everglades sky! 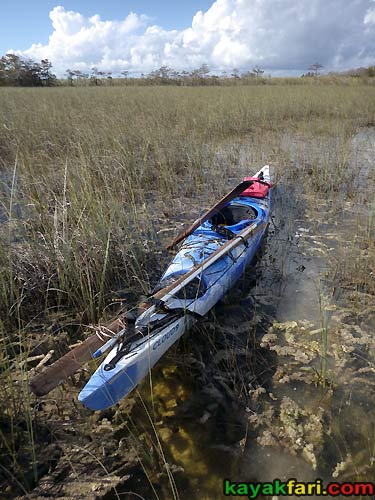 At this point we determined we were just about half way to Main Street in the slough. It had taken hours to get this far with such low water levels. We decided to turn back, although the water was deep enough from here on. We were just running out of daylight! We made it through the most difficult parts as-is, so with higher water levels we feel confident in reaching the Main Street intersect on a future trip! 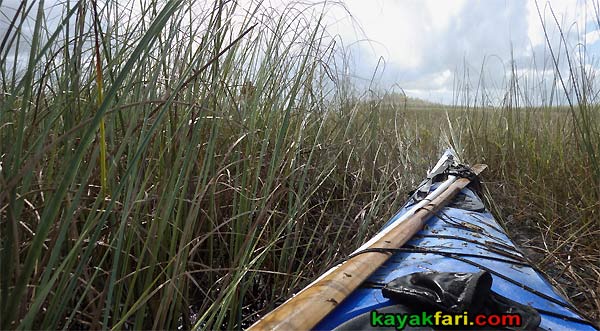 Punching out through a sawgrass channel into a delicious sun shower..

Sun shower over sawgrass and hammock in the Everglades.

It was great to experience a range of weather out in the Glades!

Watching the rain showers passing by on the prairies of Shark River slough.
Kayakfari ART Photography. 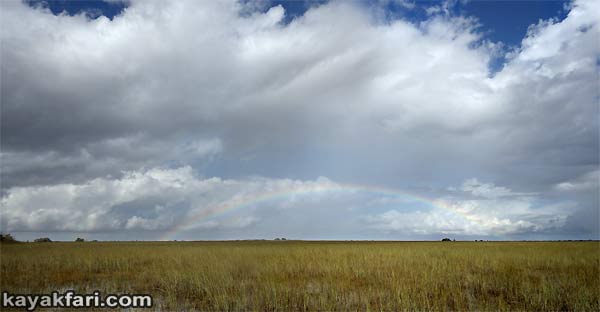 Resultant rainbow from the sun shower.

“Did someone say water?”

Returning back to the Pahayokee boardwalk we noticed a slight increase in water! Later, checking the water level data of the NP62 water station at Pahayokee confirmed this.  Historical data also shows that the highest water this year had been at 2.4ft vs the 1.9ft we were paddling. That half a foot is all that’s needed to float boats!

Aerial 360 view from the other side of the Pahayokee Overlook boardwalk.
CLICK for spin-around panorama!

We all agreed that we had done a really great crossfit style workout!

In the end we “paddled” close to 7 miles. Most of this was sliding over the slick vegetation and full on slough slogging, pulling boats! Maybe 20% was actually spent floating and paddling. The trip was a success in that we were able to establish a base for the water level at Pahayokee, and proved Terry’s route will work with just a bit more water. Also, as anticipated, the water does get deeper the closer we got to the center of Shark River slough.

I had a great time photographing the amazing Everglades imagery –

with many great additions coming to Kayakfari ART.

The view from the Pahayokee Overlook – from where we’d just come out of.

This successful trip was seven years in the making!

With the historic high water levels in the Everglades during the fall of 2020, we finally connected! Seven paddlers took advantage and paddled from the Pahayokee Overlook to the center of the Shark River Slough and back!

The magnificent seven paddled to Main Street in the middle of Shark River Slough in the Everglades.
“Main Street” is a navigable airboat trail which runs length of the Shark Slough inside ENP.
In this aerial photo you can see it disappearing into the distance due NE!

© 2013 – 2022 Flex Maslan / kayakfari.com / awakenthegrass.com. All original photographs, artworks and music in this portfolio are copyrighted and owned by the artist, Flex Maslan, unless otherwise noted. Any reproduction, modification, publication, transmission, transfer, or exploitation of any of the content, for personal or commercial use, whether in whole or in part, without written permission from the artist is strictly prohibited.

5 comments on “Pahayokee Overlook to Main Street – Probing into the middle of Shark River Slough.”