“Rudolph was my Co-Pilot”

The Boca Raton Holiday Boat Parade is one of several held throughout South Florida during the Holiday Season. While not as elaborate as the BIG Seminole Hard Rock Winterfest Boat Parade in Ft Lauderdale, it makes up for it with a much more personal feel and great Holiday cheer!! Human powered watercraft are not excluded, and it’s possible to take part in a kayak!

Kayak Ted with daughter Olivia and paddler Erika F. plus one behind the camera ready to paddle into the sunset at the 2016 Boca Raton Holiday Boat Parade!

As in previous years, we would be to launching at Silver Palm Park, off Palmetto Park Rd. This is a public boat ramp with free parking under the bridge. 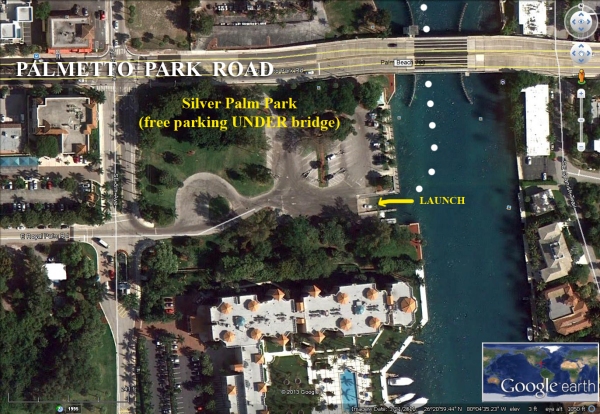 Straightforward parade route on the ICW had us paddling about 10 miles total this year!

The Boca Raton Holiday Parade runs down the Intracoastal Waterway, starting at the C-15 Canal on the northern Boca Raton city boundary all the way south to Lake Boca Raton. We’d have to paddle 5 miles due north to join up with all the other boats and then those same 5 miles back down leading the Parade!

Kayak Ted paddling in front of one of the few original waterfront homes along the intracoastal waterway in Boca Raton.

Most of the homes on the water are now of the “Mansion” variety. They can get quite large!
We noticed Santa having some difficulty trying to climb up to the roof.

Our theory was that maybe Santa got confused trying to find the chimney! 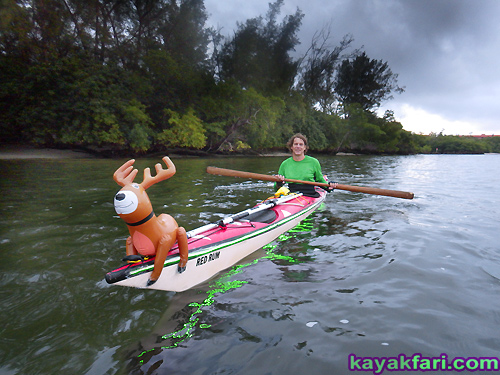 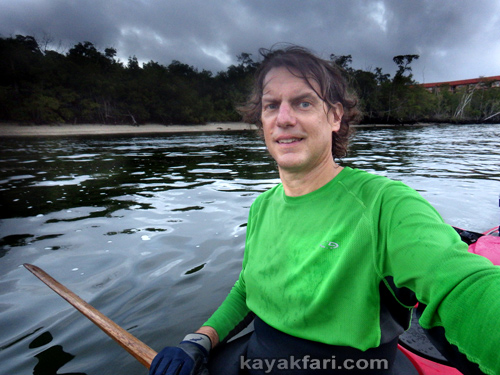 Kayaker Erika F. paddling up against the current.

There were a lot of powerboats passing us by. Note the wave from the wakes!
“Better be Good” was actually a very considerate boater. Sadly many of the others were not!

There are 300 LEDs on each side, each run off 12v from a pack of AA rechargeable batteries. I get about 2 hours of full brightness followed by several hours more at a reduced level.

Tools of the trade for a Holiday boat parade paddler:
Rudolph, waterproof hi-beam flashlight and a selection of loud whistles! 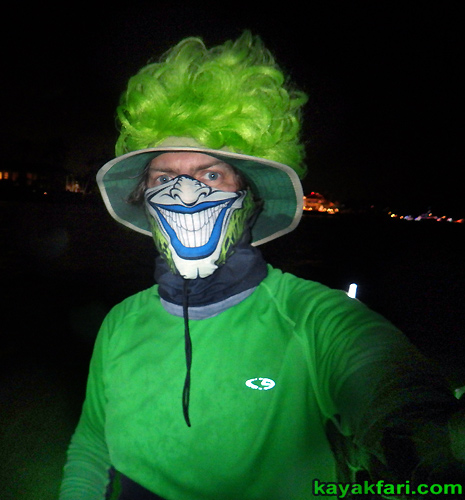 As night fell, I turned into the Christmas Jokah! 🙂

Captain’s log supplement:
Rudolph has completely taken over.
I have no more control. Merry Christmas!

After almost five miles of energetic paddling we regrouped on a small tidal beach next to some old dock pilings just south of the C-15 Canal and the start of the parade. 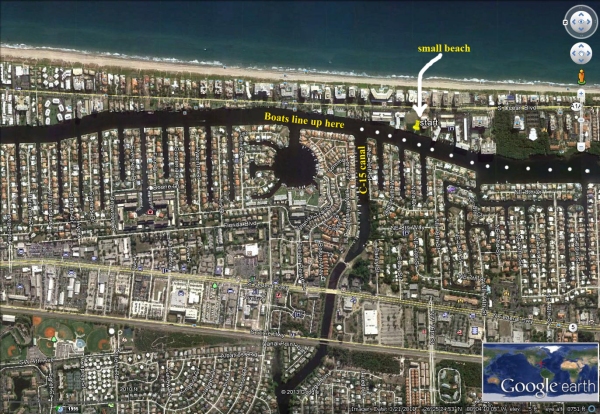 Detail of C-15 Canal area and the starting line for the Boca Raton Holiday Boat Parade. 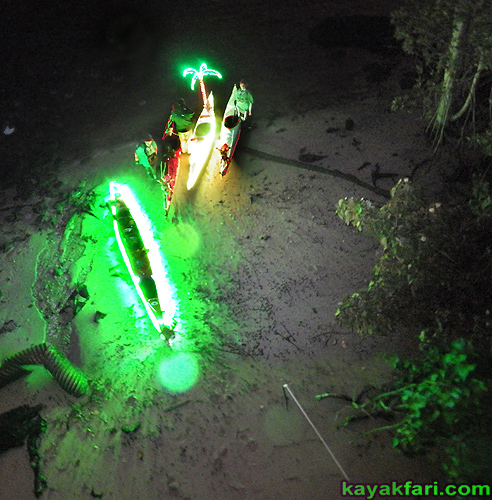 Kayak Ted deployed his lit-up palm tree and he also had a set of bright color changing LED lights strips. His Rudolph is otherwise known as RUDOLPH1.

Happy Holidays, Happy .. Everything from our four kayak flotilla! 🙂 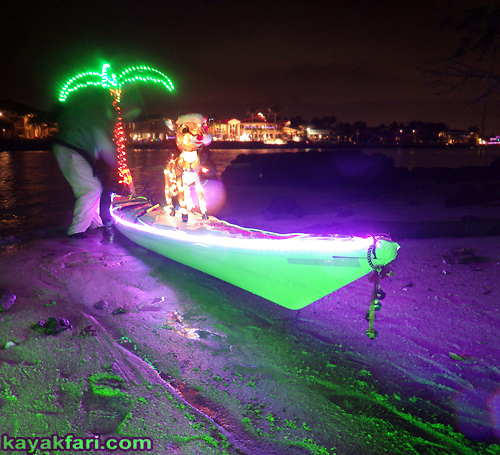 The many color phases of Kayak Ted’s LED lights! 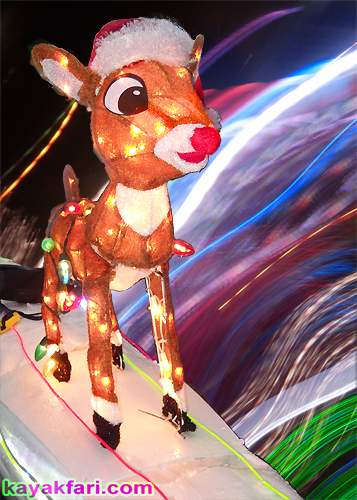 RUDOLPH1 ready to take the lead!

We led the parade again this year and really enjoyed ourselves spreading good Holiday cheer to all! The Boca Raton parade is on a much smaller scale than Ft Lauderdale’s Winterfest Boat Parade, but the experience also felt more personal and intimate because of it. Paddling in the parade was easy as we were now going with the current! 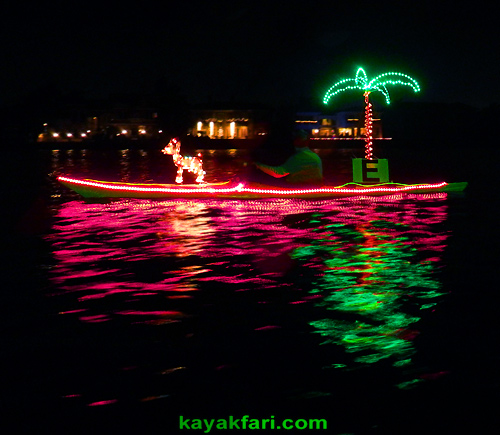 It’s a tropical Christmas with Kayak Ted under Rudolph control! 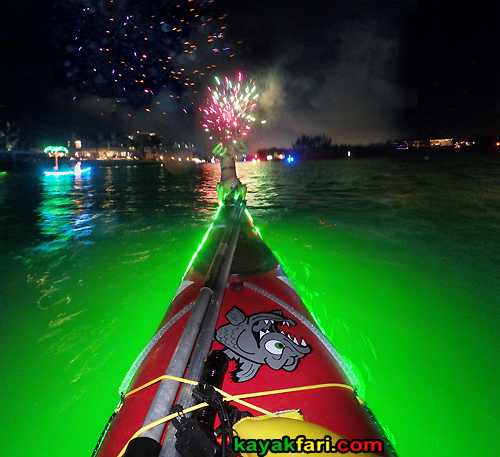 Holiday fireworks with Rudolph as my Co-Pilot!

Reds and greens are not only Holiday colors, they’re also navigation colors.

Zooming under the Spanish River Blvd bridge with my green LEDs lighting the way. 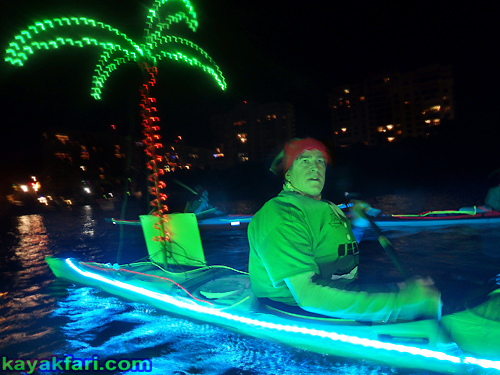 This year was our most colorful yet! 🙂

We had it pretty easy, cruising down the intracoastal waterway of the parade route for the most part. However the tide changed and as we paddled further back south closer to Lake Boca Raton we encountered progressively more resistance. By the time we were under the Palmetto Park Rd bridge, we were going straight into a very strong tidal rip current. The waterway is constricted under the bridge, especially near low tide. This results in a funnel effect and a good 4 or 5 knot head current as the “lake” is fed directly from the ocean. Very tricky paddling here – use extra caution!

Olivia and Ted come in after some intense paddling against the tidal rip current under the Palmetto Park Rd bridge! 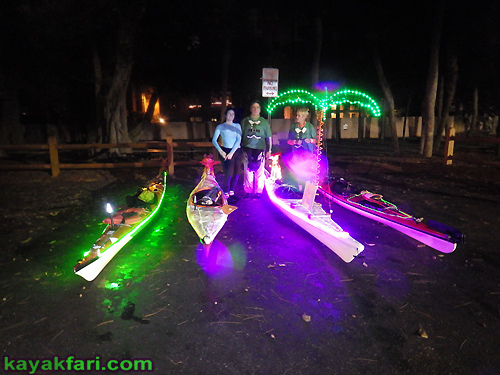 This was a very family friendly vibe and crowd, with good cheer for the Holidays for all!

A BIG thanks to Kayak Ted, Olivia and Erika F.  and the City of Boca Raton for a fun and enjoyable evening paddling on the water!

Resistance was minimal at the 2014 Boca Raton Holiday Boat Parade!

© 2016 Flex Maslan / kayakfari.com / awakenthegrass.com. All original photographs, artworks and music in this portfolio are copyrighted and owned by the artist, Flex Maslan, unless otherwise noted. Any reproduction, modification, publication, transmission, transfer, or exploitation of any of the content, for personal or commercial use, whether in whole or in part, without written permission from the artist is strictly prohibited.

With that said.. Blessings friends!