South Florida experienced the wrath of hurricane Irma on September 9 to 11, 2017. The huge storm made a last minute shift to the west which meant that the east coast was spared it’s full fury.

It was a very, very close call!

The Lower Keys and west coast of South Florida however we not so lucky and lives were lost amid the scenes of destruction and flooding!

Chip in my windshield with weathered tape and a sky that’s just got done crying!

We’ve all seen the images on TV and media by now, but what is often left out of these reports is the incredible damage these kinds of storms can also do to reefs, shorelines and wild areas like Florida Bay and Everglades National Park.

Boat half sunk at dock by hurricane Irma in Dania Beach.

Close to home, I went paddling on September 13, 2017 to see the impact of hurricane Irma on Dania Beach, Whiskey Creek and Mizell-Johnson (John U Lloyd) State Park!

Currents can run strong in the intracoastal waterway near the Dania Beach Blvd bridge!

Access roads to the Park and beaches were closed, and the water quality both in the intracoastal waterway and ocean was murky, smelly with lots of suspended particulate matter.

Certainly not the time for swimming!

Hurricane Irma storm surge piled seagrasses high up over the fishing jetty on the south side of Port Everglades inlet in Ft Lauderdale.

Decaying organic matter piled up on the beach at Mizell Johnson (John U Lloyd) State Park.

Not surprisingly, there weren’t many boaters out, just mostly tugs and freighters doing their jobs.

I was the only paddler out!

Even though the Park itself was closed, I felt it reasonable to make a beach landing in the intertidal zone, technically just outside the Park boundary. I’m no lawyer, but I believe this applies to any navigable beach or shoreline in Florida. Generally anything submerged under the mean high tide line is considered sovereign public land and is usually referred to as “Riparian Rights” or as the “Public Trust Doctrine“.

Looking due south near high tide at what little is left of the beach! 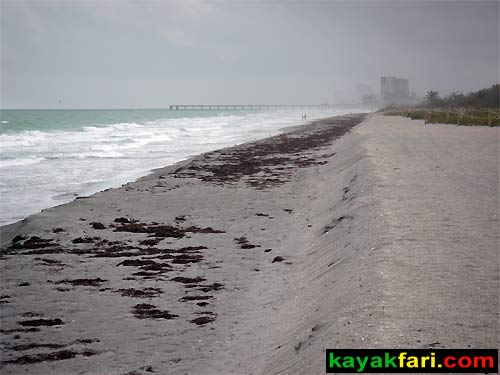 Same scene as above about ten years ago when there was a lot more beach!
Paddling on Whiskey Creek at Mizell-Johnson (John U Lloyd) State Park in Dania Beach.

The beach at Mizell Johnson (John U Lloyd) State Park has been suffering from rapid beach erosion for many years, so all the blame can’t be put on Irma alone.

However it is clear that this powerful hurricane has certainly finished it off!

MS Oasis of the Seas – sister ship to the Allure of the Seas heading out on a different day creating a hazard to paddlers.
Rip current hydraulic – a cruise ship so big that it actually drains the water out of Port Everglades inlet! 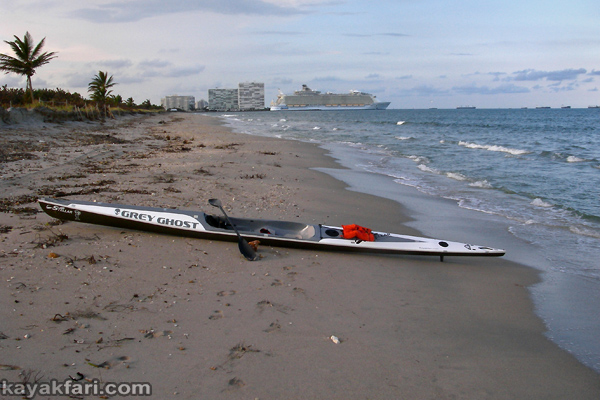 Similar view as above circa 2007 – looking at a lot more beach!
ONE WAY is an older Findeisen Shearwater surfski.
Paddling on Whiskey Creek at Mizell-Johnson (John U Lloyd) State Park in Dania Beach.

Hurricane Irma pretty much finished off the beach at Mizell Johnson (John U Lloyd) State Park! 😦

I arrived at the beach near high tide, but the storm surge had washed away all the beach right up to the vegetation line. In the interior on Whiskey Creek itself, there was minimal impact since it is bounded only by mangroves and sea grapes. 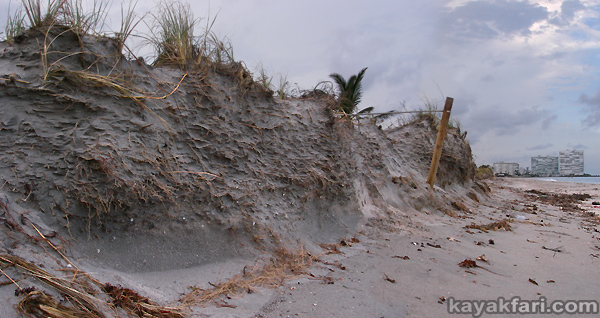 Severe “cliffing” of the sand dunes illustrate the importance of shoreline vegetation in controlling beach erosion!

The sea oats are the only thing holding the beach that is now left at Mizell Johnson (John U Lloyd) State Park.

Compare the aerial panorama above which shows (an already eroding) vegetation line from 2012 with the completely depleted post Irma 2017 beach!! 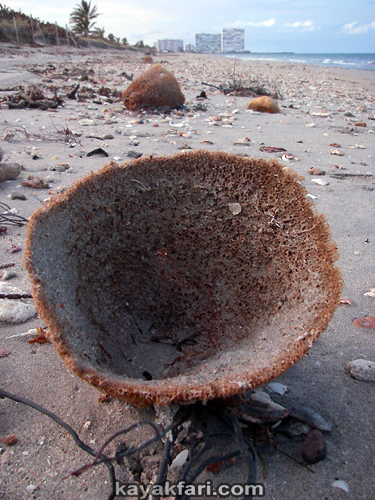 Sea sponges washed up on the beach after hurricane Irma.

The storm surge from hurricane Irma also deposited a lot of sea life and marine trash debris onto the depleted shoreline.

Plastic toy/ocean debris amongst the reef remains deposited by hurricane Irma on the beach.

Remains of the shallow reefs offshore deposited by the strong storm surge.

Up until only a few days ago, these were parts of reefs! 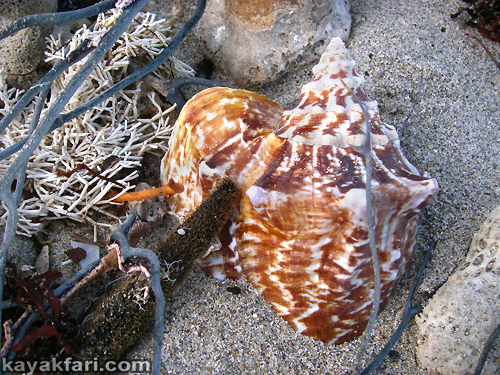 Young Conch among the beach debris.

As it were in this one particular stretch of shoreline, I began to come across many Queen Conchs – a protected species in Florida since 1985. 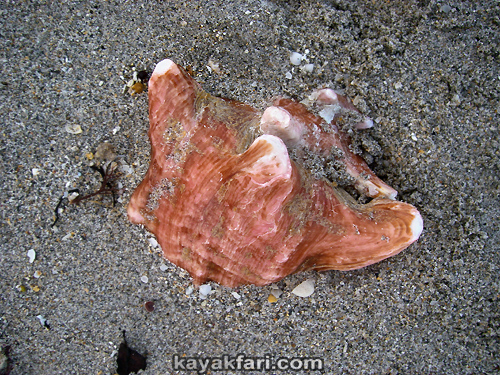 Some Conchs were easy to find sticking up from the sand, but they were all left “high and dry” above the high tide line!

As I surveyed the beach, I found dozens of Conchs of all sizes. They were literally “washed up” with the surge and sitting just above the high tide line. Since the Park was closed, no one would be coming and no tide would reach to save them.

Realizing that they were all doomed without my help, I took liberty and began to repatriate them back into the ocean. 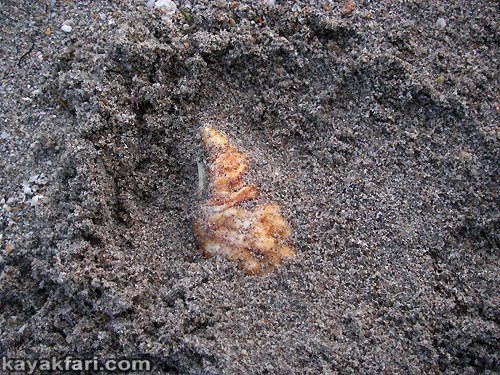 Some Conchs were almost completely buried or entombed is wet sand.

Pulling these out revealed that many were still alive but left helplessly out of the water!

It was hard to know which were still alive, but the ones in the best shape were entombed in the still wet sand. I spent the next 20 minutes or so pulling all I could find and putting them back in the water.

I estimate “saving” about 50 conchs and do hope some percentage of those actually make it!! 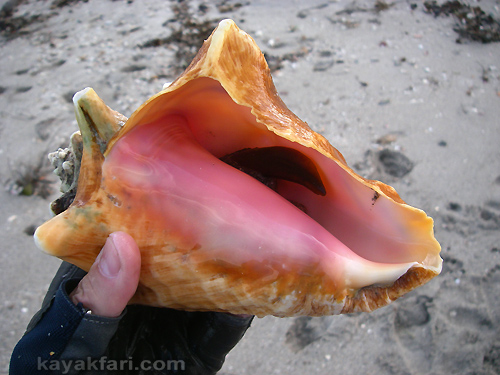 Cleaning the Conch of sand in the surf shows the “foot” of this living individual.

Queen Conch about to be repatriated back into the sea! 🙂

Among the washed up debris I also found new life looking for an opportunity to grow such as this mangrove shoot. 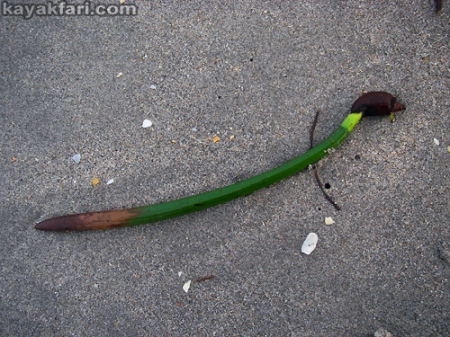 Nature is always regenerating itself – even where humans try to banish it.
CLICK for South Florida’s walking coastal Mangroves!

Powerful storms like hurricane Irma graphically illustrate the need for protection and re-seeding of shoreline vegetation wherever possible!!

! BLESS
That’s the Way it is

© 2017 Flex Maslan / kayakfari.com / awakenthegrass.com . All original photographs, artworks and music in this portfolio are copyrighted and owned by the artist, Flex Maslan, unless otherwise noted. Any reproduction, modification, publication, transmission, transfer, or exploitation of any of the content, for personal or commercial use, whether in whole or in part, without written permission from the artist is strictly prohibited.