Exploring a Higher Ground in the Lower Keys! 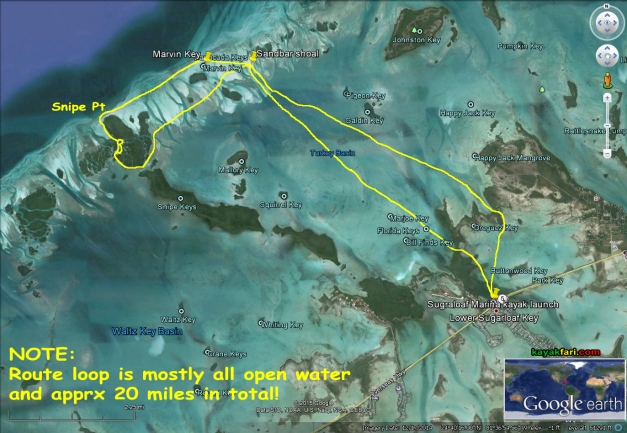 Satellite view of approximate 20 mile route paddling through a part of the Great White Heron Wildlife Refuge in the lower Keys.

Preface: This is Island time! 🙂

“You’re only the second time I’ve heard of somebody kayaking all the way out there”, said the lady in the office at the motel on Sugarloaf Key when I asked her about paddling out to Marvin and Snipe Keys in the “backcountry” of the lower Keys. I was not planning to stay at their motel, but the location was good and also probably the only choice for worry-free overnight parking. This is something that the proprietors are aware of and they charge a corresponding daily parking fee.

For another, much more reasonable fee, I could launch right next door at Sugarloaf Marina from their gravel beach. They rent sit on top kayaks as well as conduct tours via a Key West outfitter, but I suppose very few renters would paddle this 15 – 20 mile loop on their own. This spot is easy to find since it’s right off US 1. It’s clean and well worth the $3 for peace of mind and ease of loading and unloading. 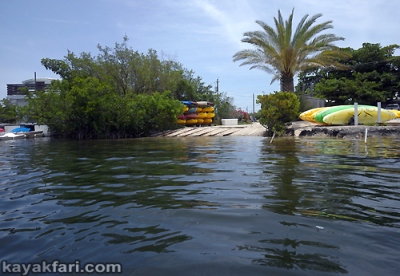 Looking back at the launch site from Sugarloaf Marina.
It’s conveniently positioned right off US 1 and separate from the boat ramps.

For this summer trip in the lower Keys, my friend Stephen and I hatched a crazy plan to check out the Marvin, Snipe and other nearby keys in the middle of summer. Conditions in the South Florida summer often call for calm seas with light predominantly easterly winds, but then there’s the heat, the frequent storms, and lots of bugs to deal with. Most paddlers won’t do longer trips nor any backcountry kayak trips at all until fall rolls around in October or November. With some exceptions, I generally I do the same. However this summer of 2015 is different, as we haven’t been getting the regular afternoon summer monsoon squalls for some reason.  So I said what the heck, it’ll just be the heat and the bugs then. I am heat tolerant, and I do have a bug suit after all! 😉 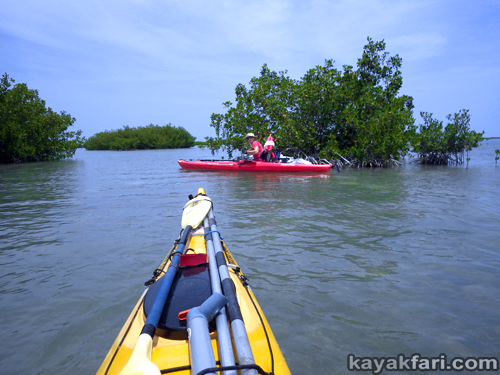 Upper Sugarloaf Sound on the Bay side of US 1.

It’s about 7 miles from the launch to Marvin Key in a straightforward northwesterly direction. Navigation is easy in a kayak here as long as you have a general map of the area and a compass heading to go by. A GPS unit could be nice, but isn’t really necessary for this trip. Most of the paddle is in open water, and involves crossing the entirety of a geographical feature called Turkey Basin. One thing all paddlers should be aware of is that the tides run strong here in the lower Keys, particularly between the Gulf and the many narrow channels running through the shoals and between keys. You really want to time your trips working with the tides! Also keep in mind that on really low tides, especially when combined with winds, the water can get blown out and expose the sea bed for miles around. This can make travel from one place to another impossible!

Marvin Key is privately owned, and along with a few other private undeveloped keys has an established history of allowing limited public use. This entire area is a part of the Great White Heron National Wildlife Refuge, so even though the refuge islands are generally off-limits, these private keys are the exception. The Marvin, Snipe and other nearby Keys are also a very popular hangout spot for lower Keys boaters and residents, since it is in their backyard! Expect a “sandbar party” type atmosphere, especially on weekends and major holidays. 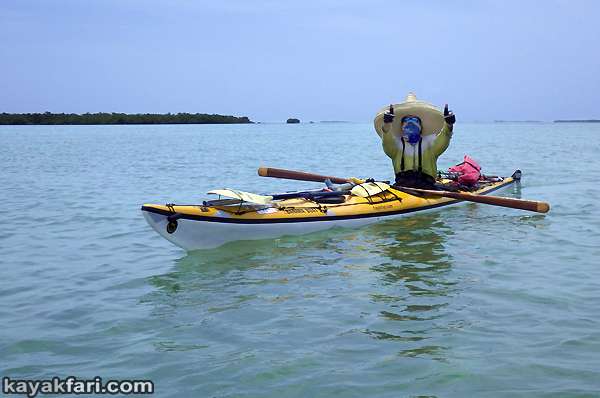 Stephen paddled a 14 foot sit on top, however he’s really at home on the water and can keep up a good pace. He is living proof that with motivation and stamina you don’t necessarily need a fancy sea kayak for longer trips. My boat, the “Banana Boat” is an older Seda Glider model with a custom large front hatch and other mods. The Glider is still in production and remains one of the fastest productions kayaks ever made! Having been in both the Pacific and Atlantic waters, she’s a great and durable kayak. Even at 23 years old there’s “fancy” in her, and she carries all my gear with speed! I’ve been paddling her mostly with my favorite Greenland stick supplemented by a wing paddle for certain conditions.

These days multi-functional headwear like the Buff are a common sight out in the backcountry, and everybody now looks like a bandit! I took this up a notch and my paddling “disguise” was a Buff topped off with my biggest Sombrero for maximum sun protection. 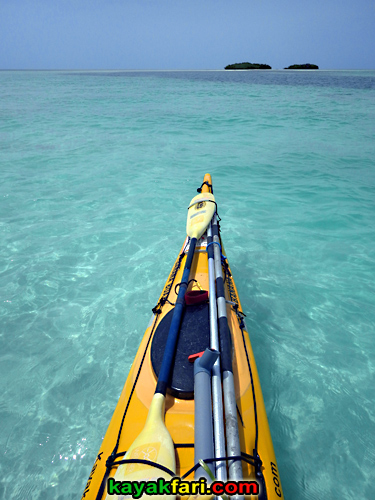 It didn’t take long for the classic aqua green-blue world colors of the Keys to show up! We spotted a very small sandbar en route to Marvin Key, just south of the Barracuda Keys and decided to stop for lunch. This proved to be a blessing in more ways than one! 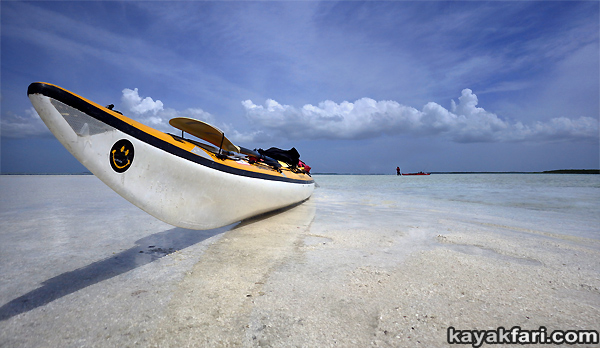 Extreme low tide on the sandbar.

One great aspect of a sandbar is that since it is surrounded by water and there’s no vegetation, there are absolutely no bugs to deal with. On the flip side, it’s hot in the sun, so it helps to bring your own shade in the form of an umbrella or a Sombrero. If you decide to work on your tan, don’t forget to flip over. You wouldn’t want to go home half baked! 😉 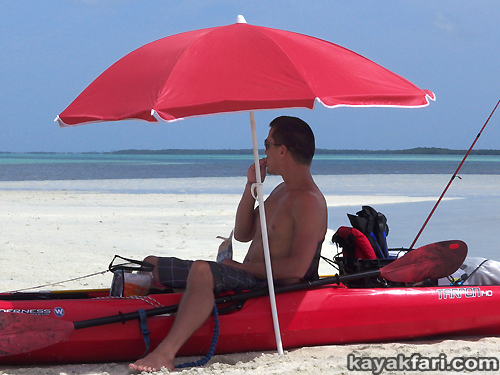 Stephen snacking in shades of red. 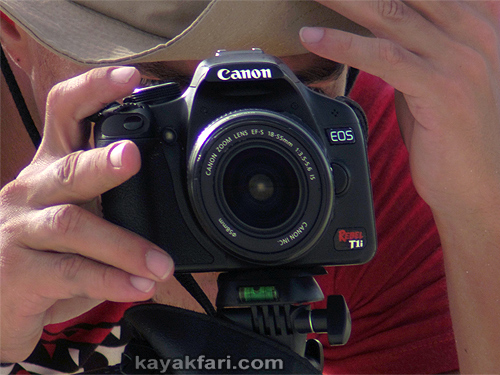 Photographer on photographer – capturing the moments.
Looks like the bubble level was spot on!

As luck would have it, this trip occurred near the full moon and the tidal ranges were at the extremes for the Keys! This little sandbar shoal was just about underwater during the daytime high tide, and conversely the daytime low left the seabed exposed almost as far as I could see. This presented some great photographic opportunities, and both myself and Stephen got busy taking pictures and videos. 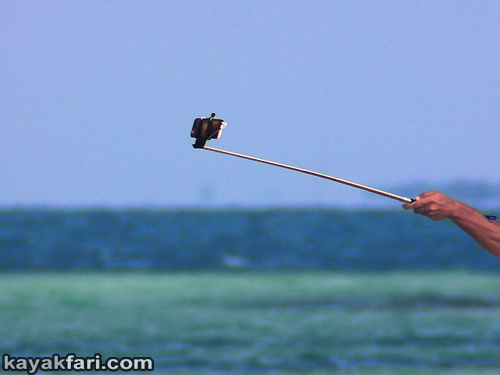 Selfie videos being made in the lower Keys backcountry. 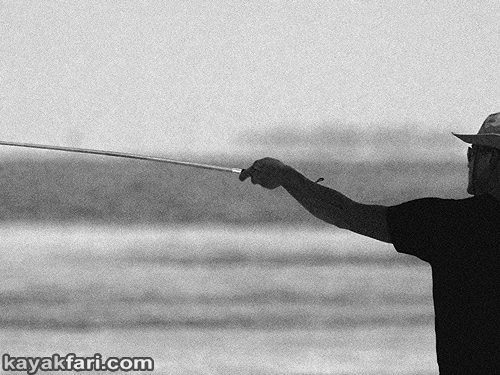 Transition to some black and white photography on the sandbar shoal.

Extreme telephoto view of boaters and the Marvin Keys.

The Florida Keys waters are famous for the beautiful aquamarine colors as we shall see below, but the sandbar itself is very monochromatic in shades of reddish brown. I’ve reduced it here to black and white, but with an extra helping of spatial distortion! 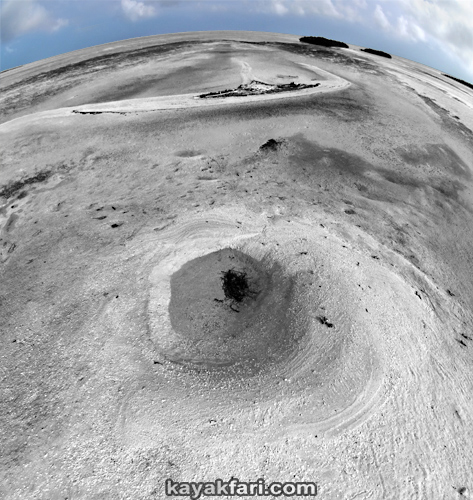 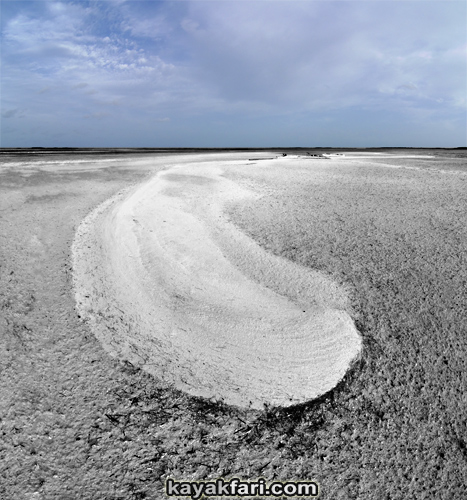 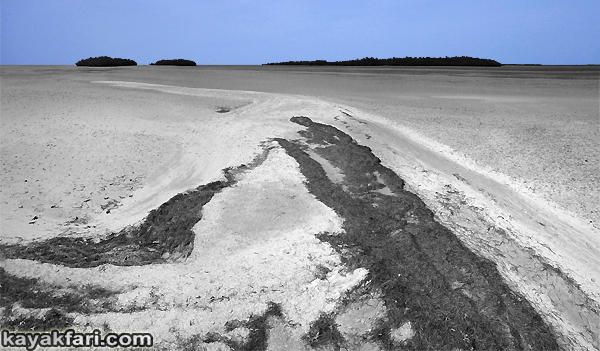 “Top of the Bar”
Available from Kayakfari ART Photography. 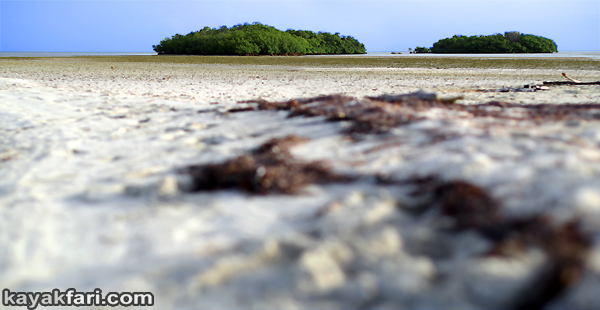 Sandbar with some bookeh and two of the Barracuda Keys.

Back in color, I have nothing but great things to say about my giant Sombrero. It provided me with about the same shade as Stephen’s red umbrella! 😉 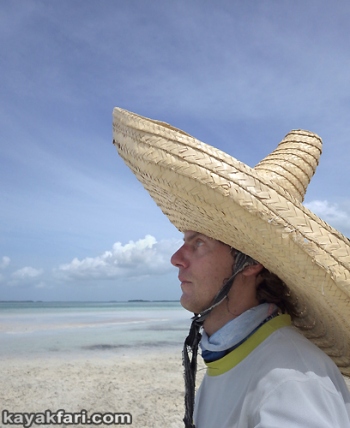 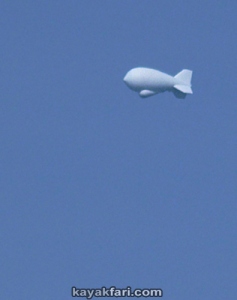 “Fat Albert” – one of 2 aerostat blimps that operate out of nearby Cudjoe Key.

If you notice a blimp in the sky, don’t worry it’s not just you. These are a couple of “spy/propaganda” blimps operated from an installation on nearby Cudjoe Key. Known as “Fat Albert”, they are tethered to the ground and have been snooping up on low flying planes and transmitting Radio Marti programming to Cuba for decades. The signal has been jammed since day one, and it is known in Cuba as “No se ve TV” since nobody ever sees it. I would call them expensive relics of Cold War politics and the (failed) US “War on Drugs”.

The blimp can however serve a useful purpose for paddlers since the location is fixed, kinda like a lighthouse/beacon in the sky. Also, you can tell the wind direction according to where the blimp points! So by looking for the blimp, you can get a general idea of your location and prevailing winds, but be aware that they change the blimp’s height constantly even upwards of 10 000 feet! 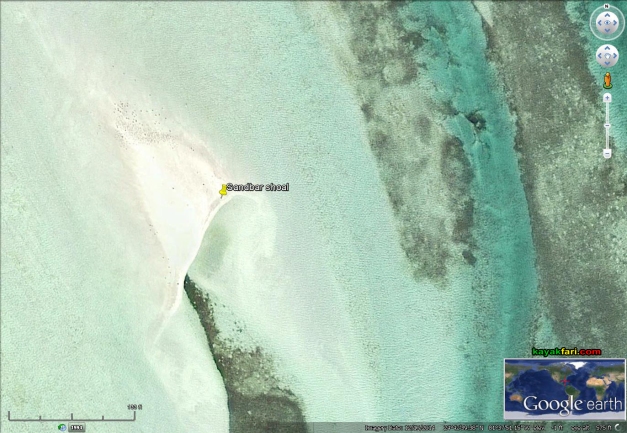 Satellite close up view of the sandbar reveals it was just beginning to form only about 6 months ago.

Comparing the satellite view above with my elevated aerial view below, we can see how quickly shoals shift and move around. I’d say that this little sandbar has only become exposed in the last few months. It could be gone just as quickly! 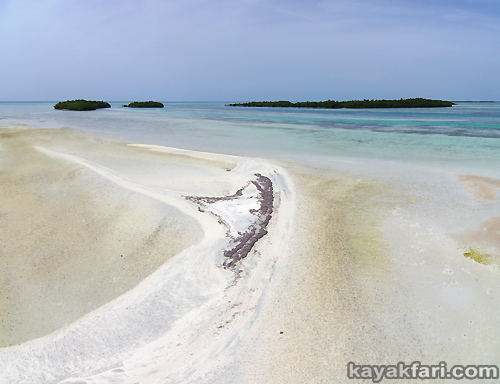 Low tide at the sandbar shoal with the Barracuda Keys in the background.

The “top” of this shoal is smaller than a typical living room. The washed up vegetation marks the most recent high tides. On low tide the exposed seabed gives a completely different ambience! 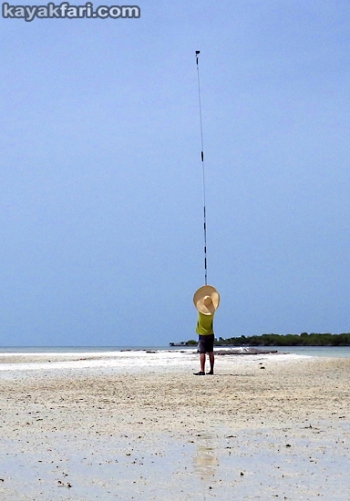 Fishing the Sky for aerial images of the sandbar.
CLICK for story! 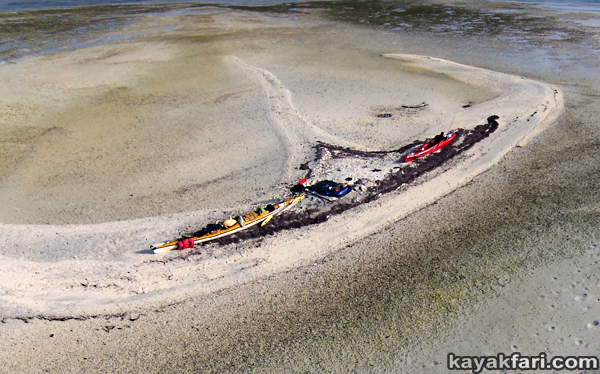 The shape of the high ground “living room” we pulled up on is an interesting contoured triangle type shape. The graceful curves remind me of the pediment shapes often seen in Neoclassical architecture!

Aerial view of tide filling in the sandbar shoal and bringing in the colors!
Note the Marvin Keys about a mile away in the distance.
CLICK for interactive aerial panorama!

The Keys are a paradise world of delicious blue-green aquamarine colors and hues.

Enjoy these ultra telephoto views of the Barracuda Keys and surrounding flats! 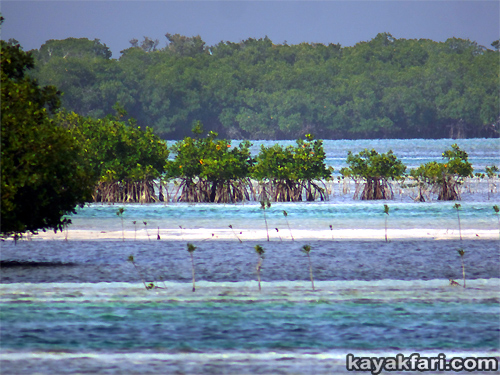 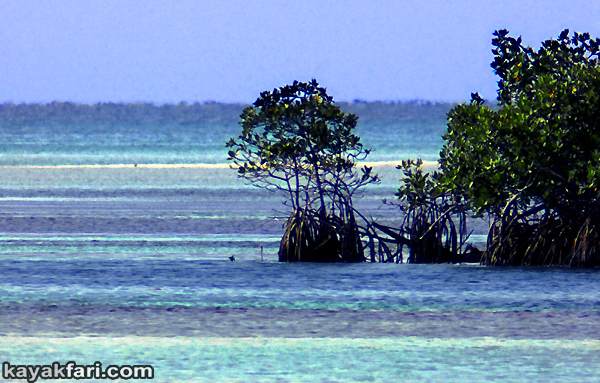 “Wings and colors of the Keys #1”
Available from Kayakfari ART Photography.

Exploring a Higher Ground in the Lower Keys! 🙂

Select images available as high quality archival prints for sale directly to you in various sizes for all your collecting, decorating and viewing pleasures and needs.

One comment on “Exploring a Higher Ground in the Lower Keys!”