My first kayak started a lifelong investment in

Paddling a SOT rental kayak back in the summer of 1991.
I did not know it at the time, but this is the now classic Ocean Kayak Scupper Pro!

Back in 1991 most of my paddling experience was with a big red Coleman canoe that I had purchased a couple of years prior. I took that 17 foot canoe lots of places, mostly on interior Florida lakes and streams. I didn’t know much about kayaks at all, save from paddling rentals a few times. I was intrigued by the small size and lightweight however. So when a kayaking co-worker friend offered to connect me with a kayak selling for $100, I took the bait! My friend was Stefan Kalman (RIP amigo) who had already spent a few years paddling the South Florida area.

The kayak I got was 12.5 ft x 21.5 inches wide and looked to be home made out of fiberglass with wood stringers. It was lightweight, maybe around 30 lbs and well made, just needed a new paint job mostly. Unfortunately it had no seat, so I adapted a plastic boat bucket seat to drop in. More importantly, it also lacked any flotation and there was no coaming to attach a spray skirt to. It did have a funky drop in steerable “skeg” near the stern which was operated with two lines that had hooks for the big toes, but no foot pegs! 😮

I proceeded to get rid of the steering system right away and glassed over that area of the boat. Not knowing anything about paddling, I initially thought I’d turn the boat with just the paddle. Well, I didn’t know I had to also lean the boat (in the opposite direction) and this resulted in much frustration. Basically, once the boat started to track to one side, it would keep going there no matter what else I tried!

Such were the trials and tribulations of my earliest kayaking days!

Back then, the big names in the kayaking world were Aquaterra (now Perception), Necky, Hydra, Easy Rider, Wilderness Systems, Eddyline and a few others. Basic plastic kayaks cost about $500 I think and sea kayaks would have run maybe $800 to $1500. So to get a composite kayak (even if “incomplete”) for $100 seemed not too bad at the time.

I unofficially dubbed this boat the “Thrasher”.

My awesome 80s Toyota 4×4 that took me lots of places with custom kayak cradles for my “new” kayak.

These are the first pics of me paddling my “new” kayak. I still recall vividly when I first got in, I immediately went right over on the other side. Ha ha!

The SOT plastic kayaks I briefly paddled before this boat felt very stable in comparison. Needless to say the lack of a seat and any kind of bracing control didn’t help either!

My first test paddle was in a rock quarry in West Broward somewhere near I-75.

This was a an old rock quarry in 1991 when I test paddled my “Thrasher” kayak there.
Today this is a subdivision with lakefront homes.

Initially I learned to paddle at Tigertail Lake in Dania when it was still a good sized body of water. I also learned to sail there, btw – thanks BCC! Later, West Lake Park in Hollywood was a great place to practice my paddling on a bigger scale. I recall being very excited paddling the two mile south to north stretch without capsizing!

After this I gained enough confidence to take the kayak out into the ocean, mostly at Ft Lauderdale beach when parking and launching there was still convenient and hassle-free. 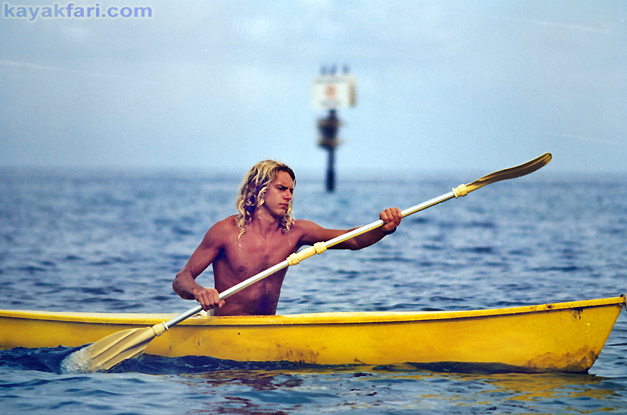 Paddling my first kayak off Key Biscayne, circa fall 1991.

Learning to paddle in 1991 was a lot different than it is today. There was no internet, no websites, no youtube, the online presence concept didn’t really exist yet. Basically it came down to visiting libraries and reading books, subscribing to Sea Kayaker magazine and hanging out at the one kayak shop in Broward county to glean some knowledge (Atlantic Coast Kayak). Lessons might have been worth it, if not for the fact that my boat didn’t even have  a seat, so I did not think it money well spent. Mostly it became a DYI learning approach by trial and many errors.

I was quite young and gung-ho and it didn’t bother me!

Paddling the Thrasher at the beach in 1991.

I really learned a lot paddling this boat off the beach!

Since it had no flotation, upon capsize, which was sure to happen, I had to swim the swamped boat to shore. Then roll it up sideways onto the beach to empty it out and repeat! One thing I found out early on was that I had a knack for surfing the boat and that was my favorite thing.

When I started paddling in 1991 everything was by trial and error.

That is until I found out that kayaking was a great way to meet girls at the beach! 🙂

Eventually I decided to upgrade this kayak by glassing in a coaming with thigh braces and bulkheads for safety. By then I was well used to the boat, only hampered by my cheap plastic Sevylor paddle. 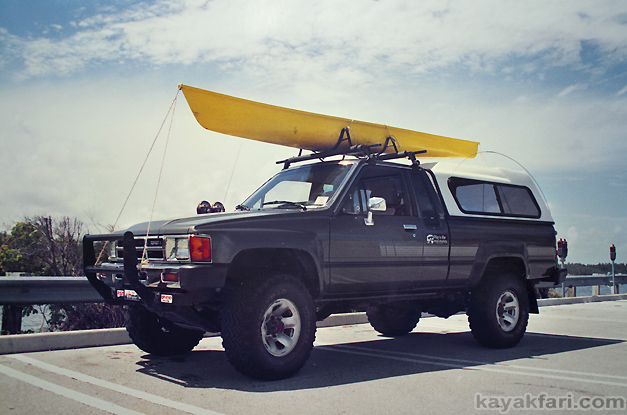 With my custom rack setup I could take my first kayak to points in Miami, like Key Biscayne.

Early use of my giant Sombrero off Dania Beach, circa 1993.
A kayaker’s tribute to the humble and versatile Sombrero!

So my first kayak infected me with the kayaking bug!

Within less than a year I purchased my first REAL kayak, a SEDA GLIDER aka the “Banana Boat” in January of 1992. The Glider took my paddling up to another level and really opened up South Florida to me. It’s been a great solid boat, and is still my main distance cruiser camping boat – going on 30 years later!

My first kayak taught me enough to make the best purchase of my life – the Banana Boat.
Winter birthday triad on Florida Bay with the ‘Banana Boat’!

I feel fortunate to have started paddling early in life in warm and sunny South Florida. A time when mistakes, accidents and misadventures tended not to leave permanent marks yet! In retrospect, those early paddling days were more formative than I could have ever imagined. Struggling through the stability and boat handling issues in those early days has paid off handsomely as I routinely paddle and surf 16 inch wide boats with ease decades later.

Those 100 dollars started me on a lifelong journey of ..

“Fitness, Adventure and Art on the High Seas”!

As great at the Seda Glider is, she is almost 20 feet long. So the Thrasher made an ideal sidekick for when a short boat was called for. I continued to do many local trips with my first kayak all through the 90s until I started working in kayak shops and was able to get nicer boats!

© 2021 Flex Maslan / kayakfari.com / awakenthegrass.com. All original photographs, artworks and music in this portfolio are copyrighted and owned by the artist, Flex Maslan, unless otherwise noted. Any reproduction, modification, publication, transmission, transfer, or exploitation of any of the content, for personal or commercial use, whether in whole or in part, without written permission from the artist is strictly prohibited.