Two months ago Hurricane Irma roared over Everglades National Park with major impacts to the west coast of South Florida. The little outpost of Flamingo at the end of the Park road was not spared and sustained defoliation, flooding, damage to structures and loss of many trees. Florida Bay was also similarly affected with significant erosion and foliage loss on many islands.

When access to Flamingo was restored, I wanted to check out the impact that the powerful storm had on the Johnson Key Chickee. This is the closest back country camping option in Florida Bay, about six miles due south of Flamingo.

Uprooted tree along the shoreline of the main camping field in Flamingo.

I had heard reports that the chickee had lost roofing, and so set out for an exploratory trip. I’ve done this route many times, always in a proper sea kayak.

This time would be different however as I was test paddling a new boat – the “Pa-Hay-Okee”.

Note that on low tide you can not go this direct route! You have to go around the flats banks either to the east or west – lest you get stuck for hours waiting on more water!! 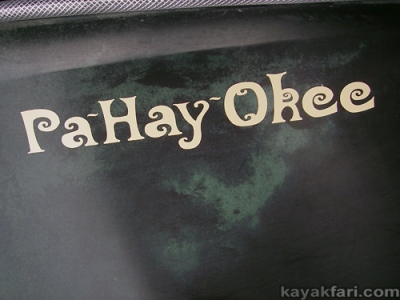 Note that this one is an older generation of this craft, which I consider a plus as the newest model is now 15-20 lbs heavier due the all the fancy seating and other gizmos.

Cruising downwind into Florida Bay with Frank Key on the horizon.

I got this boat with the specific intent to use her for interior Everglades exploration and trips. For someone of my size or less (6’2″ and 160 lbs) she’s pretty much an ideal boat. Stable enough to stand on and paddle standing up (SUP style), plenty of room for gear, very comfortable and short enough to turn on a dime. The center access hatch is perfect for photography and at 55 lbs she’s light enough to solo carry, car top and push/pull come what may. She’s also rigged out for fishing and would be ideal for hunting or spearfishing too! 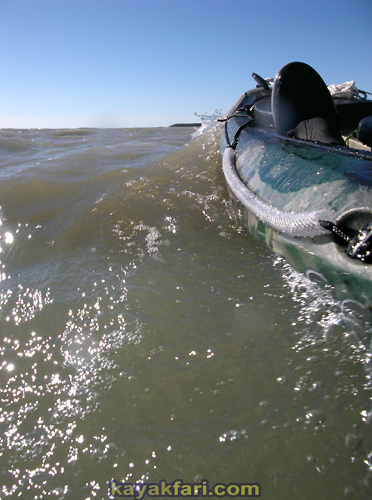 Surfing the downwind swells in my Trident 11 aka the “Pa-Hay-Okee”.

This 12 mile round trip would also serve as “sea trials” to see how she handles real open water conditions. I’ve paddled the Trident 11 before, so I knew that she was a decent paddling boat for the type. As it were, that particular day was a lil windy, with our first cold front of the fall season bringing cool north winds of about 15 knots. I got to paddle my little boat six miles downwind and six miles back upwind. I have to say, that while no sea kayak, this kayak handles and tracks reasonably well for a short 11.5 foot boat! She responds well to limited edging (by her width) and picks up swells to ride easily. I used a wing paddle exclusively and it was a good combination, just had to watch out a little for the “catch”!

However one thing immediately stood out, and that is the foot pegs. While easy to adjust, the track is positioned too high and results in only toe contact. For actually paddling, I will need to customize this so that I have proper heel contact on the boat!

You can see that there’s something missing – i.e. the toilet from a mile away!

Approaching the chickee reminded me of camping on the then all-new platform v1.0 way back in early 2010.
CLICK for story: Camping on the Johnson Key platform in Florida Bay!

Mind you I probably won’t be using “Pa-Hay-Okee” for open water trips much, but it’s really good to know how she responds to actual ocean conditions! Also, I gained good insight into what paddlers in sit on top kayaks or other short boats would face when paddling in open water like this. 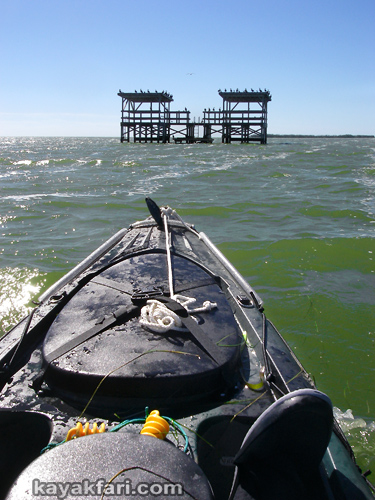 Surfing in on the final approach to the Johnson Key Chickee in October 2017.

Birds hang out on the chickee roof all the time. In fact most of the structure can be covered in guano at times. Always bring several tarps!!

So I am glad to report that there really is no bad news here. The Park has done a great job in rebuilding the roofing and the lower access platform as we shall see! 🙂 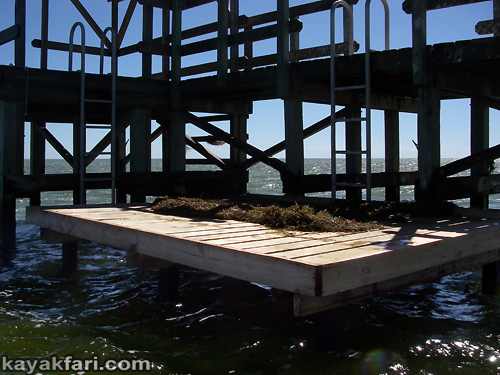 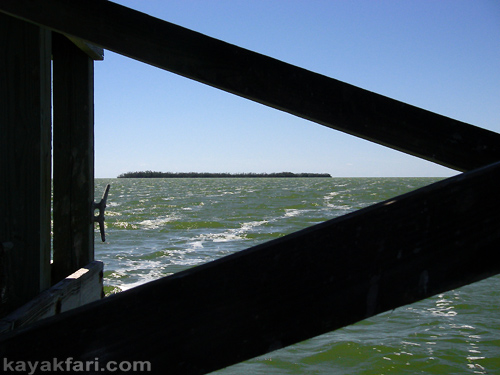 The storm surge from Irma deposited vegetation almost up to the camping level, but the structure was not damaged. 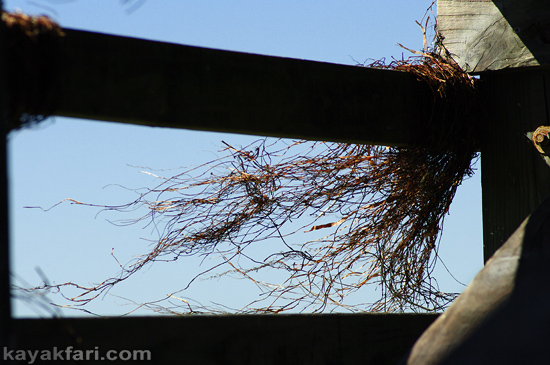 Sea grasses deposited by the Irma storm surge on the chickee structure. 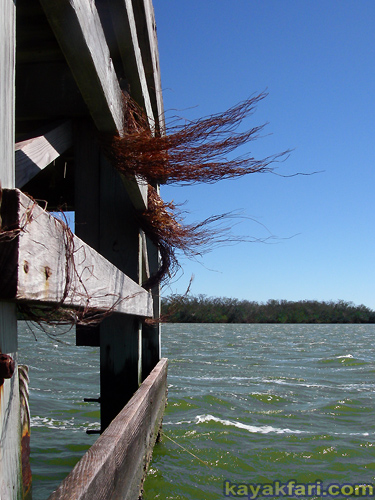 Looks like the storm surge from Irma likely reached up to the camping level!

Camping on the Johnson Key platform in Florida Bay!

“Pa-Hay-Okee” resting on the Johnson Key Chickee.
I needed to take a break and put on more clothing layers!

The only thing missing on the chickee so far is the toilet, which is just a bolt-on job. I spoke with a Ranger and was told that the Park plans to have most of the back country sites open for the up coming camping season.

Once the port-a-potty is back in place the v3.0 of the Johnson Key Chickee will be complete! 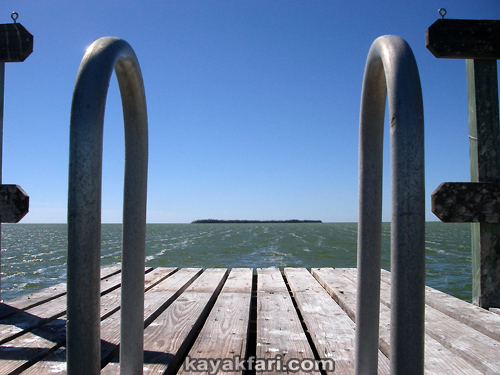 Missing here is the Port-a-potty, but instead we have a nice view of Man-o-war Key!

New on the chickee are these tie-down anchor bolts. This will make tying down tarps and lines very easy!

Up on top of the camping level the brisk cool winds chilled me down after my downwind run and I had to put on thermal layers and a paddling jacket. Unlike a sea kayak, a sit on top leaves a paddler drenched and wet, so it’s key to have light and quick drying layers for comfort and safety.

Wind chill temperatures were probably in the low 60’s or less that day, which is cool by South Florida standards! 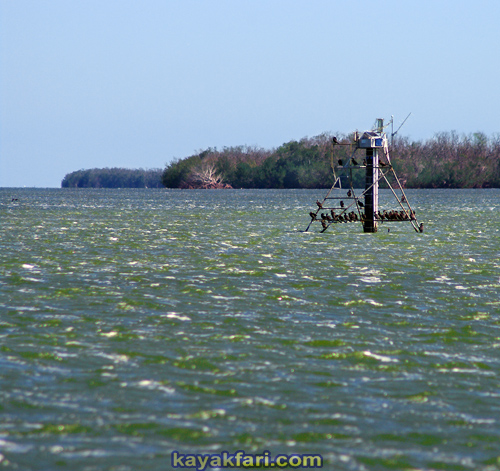 View due east toward Johnson Key and weather station tripod.
The north wind increased by mid-day from about 15 to 15-18 knots and gusting!

Looking due south towards Man-o-war Key and the brisk streaming winds! 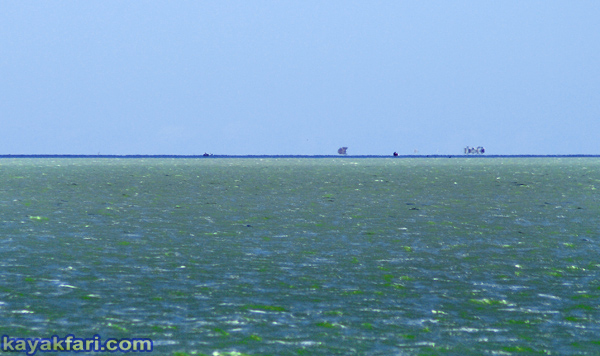 I also paddled out to scope out Irma’s impact on Carl Ross Key in western Florida Bay on a different day, in a sea kayak. Here’s a sneak peek of what it looks like now! 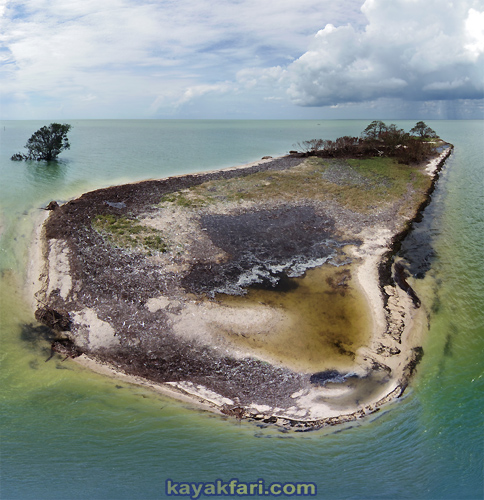 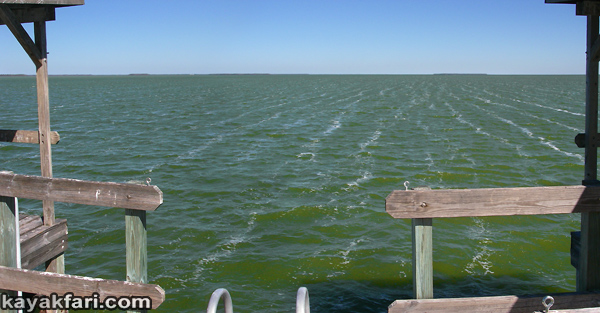 Looking due north straight into the wind towards Flamingo, six miles away!

Close-up of Flamingo over a wind swept Florida Bay!

The cell phone tower at Flamingo makes for an excellent landmark and remains visible about as far as most kayakers care to go! During the day two white flashing lights can be seen, while at night this switches to a glowing red light. This generally makes navigation easy up to about a 13 mile radius outside Flamingo, including East Cape, Little Rabbit Key and the Johnson and Shark Point chickees.

The tower is always your homing beacon! 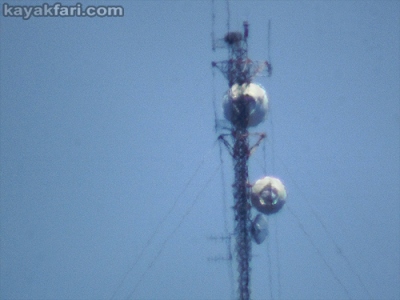 Ultra closeup of the Flamingo tower that is always your homing beacon in central Florida Bay!
Chickees and Keys in Florida Bay – Kayaking, Camping and Nice Dreams!

I timed my trip properly with the tides, so I was still able to go the direct route and skim across Dildo Key Bank (no joke!) into the Frank Key channel. Paddling the little kayak directly into the brisk wind resulted in about 2.5 knots progress on average. The Trident 11 reached hull speed of about 3 knots quickly, and was easy to maintain with my wing paddle even into the wind at a slightly reduced pace. However things really slowed down on top of the very shallow flats. I also experienced some pitch-poling in deeper water troughs as the short boat actually fit in between the wind chop swells!

South side of Frank Key showed some defoliation but there were many birds!

In the lee of Frank Key inside Frank Key Pass on post-Irma Florida Bay.

The “Pa-Hay-Okee” beached on a shoal in Florida Bay. 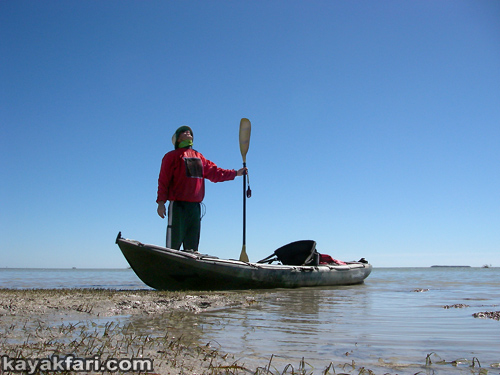 Successful sea trials of the “Pa-Hay-Okee” with wing paddle on a windy Florida Bay.
BLESS! 🙂

In the lee of Frank Key I found a shoal where was able to get out for a break and snack before the final 3 mile upwind paddle back to Flamingo. Overall I am satisfied with the open water performance of the “Pa-Hay-Okee” / Trident 11. She’s no sea kayak, but can handle her own in actual ocean conditions!

I’m looking forward to enjoying camping on the Johnson Key Chickee again once the back country campsites are re-opened!!

Satellite view of the Johnson Key Chickee in relation to Florida Bay and other campsites.
CLICK: Chickees and Keys in Florida Bay – Kayaking, Camping and Nice Dreams!

© 2017 Flex Maslan / kayakfari.com / awakenthegrass.com. All original photographs, artworks and music in this portfolio are copyrighted and owned by the artist, Flex Maslan, unless otherwise noted. Any reproduction, modification, publication, transmission, transfer, or exploitation of any of the content, for personal or commercial use, whether in whole or in part, without written permission from the artist is strictly prohibited.