The best little Piano Bar in Miami (mystery that was) !

“Say can you play me a melody, though I’m not really sure how it goes”

Panoramic from east to west over the “Mystery Piano” sand bar.

You’ve probably heard about this story on the news earlier this year. A baby grand piano suddenly appeared on a little sandbar in Biscayne Bay creating a mystery of who-done-it. Finally after a week full of wind and clouds, I was able to make it out there one sunny thursday afternoon.. to see & capture.  Sure glad that I did, because a couple of hours after I saw it, it was hauled away by a boat towing company! 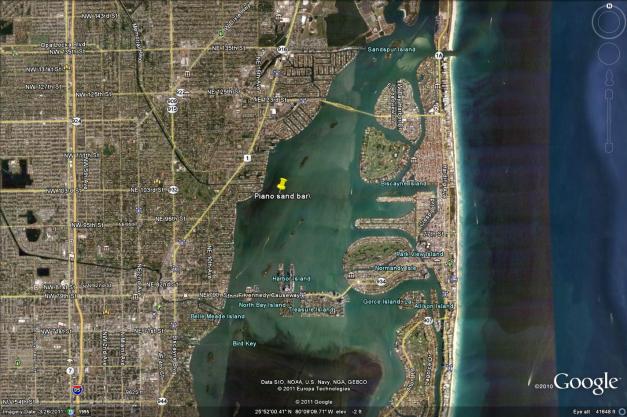 Lead-up story about the piano from NY Times

This sandbar is hard to spot from a distance, so I couldn’t see it when I launched, but paddled in a general NW direction based on Google Earth research. As I made my approach, there were already people there, including a local latin TV station doing their story accompanied by the Miami-Dade Parks’ “Pelican Island Skipper”.

Arrival at sandbar.. I watch a local Latin TV crew shooting their story ..

.. and a helicopter watches over everything!  😉

This was fun to watch, though after about 20 minutes the show was over and I was able to get out and get some of my own footage! 🙂

I took a small digital liberty with the (graffiti) “tag” already on the piano and turned it into something more conceptually interesting .. que no?!

Even though the piano was in a derelict state, having been abused, burned, shat on and attacked by saltwater corrosion for nearly a month, it stood as a powerful visual symbol out there in the bay! 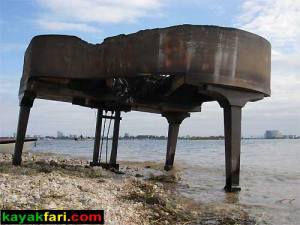 I imagined hearing Beethoven’s ‘Für Elise’ .. it was sweet! 🙂

Panoramic of Rust .. that didn’t sleep for a month! 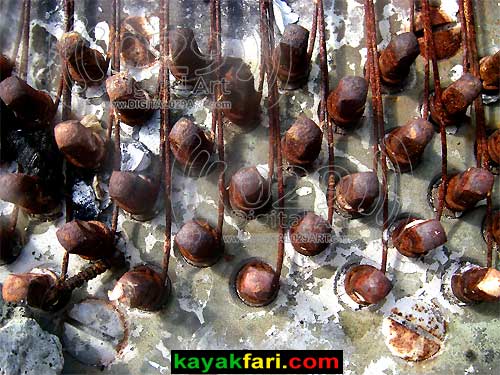 But decay can have it’s own strange charm ..

The Wheelock name goes back to 1880, but who knows how old this one was?

Another 20 minutes later, other boaters arrived and I bid farewell to this ill fated piano. It was a beautiful January day in South Florida, so I paddled out back towards some of the little islands in North Biscayne Bay to enjoy the views and put some paddling time in.

Beautiful afternoon panoramic on North Biscayne Bay in Miami is also available as a print!

JFK Causeway bridge in the distance and Miami Beach.

Just a while later I looked back at the sand bar with binoculars and watched as it got hauled away.

What good luck I had coming here today on the last day, and that I had almost entirely missed it!

Piano about to be hauled away just a couple of hours after I saw it!

Sometimes I wonder, is this what really happened to the piano? 😉

Some more stories about the piano bar:

This advertisment-free video tells the whole story and who ended up with it in the  END!!

© 2012-2019 Flex Maslan / kayakfari.com / awakenthegrass.com. All original photographs, artworks and music in this portfolio are copyrighted and owned by the artist, Flex Maslan, unless otherwise noted. Any reproduction, modification, publication, transmission, transfer, or exploitation of any of the content, for personal or commercial use, whether in whole or in part, without written permission from the artist is strictly prohibited.

One comment on “The best little Piano Bar in Miami (mystery that was) !”